Recently, For Sale signs popped up on the 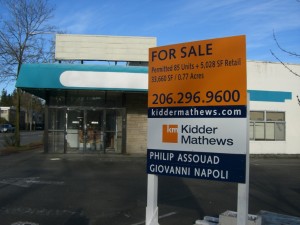 old Jewish Community Center (JCC) site, which is currently owned by Murray Franklyn.  Recently, the building has been the scene of graffiti and miscellaneous junk.  However, most of Wedgwood knows this site to be the scene of a proposed multi-story and multi-use condo project that sparked community opposition.  You can read a history of the opposition on the Wedgwood Action Group blog (not currently being updated) or see the details of the agreement here.  When the economy started to turn, the funding for the condo project dried up and it was never built despite all of the the City’s permits being approved.

In late July of 2010, the Land Use Committee contacted Murray Franklyn to reestablish dialogue with them and learn what their plans for the site were.  Based on these conversations, their proposed condo is indefinitely on hold until conditions are more favorable.  We also shared with Murray Franklyn the recently unveiled Vision Plan and informed them that the land use committee will review land use project’s for their consistency with the Vision Plan.  Murray Franklyn has been shopping the project around and the property has been for sale for some time.  So, while the For Sale signs make it more obvious of their intentions, nothing new has changed.
UPDATE: As of January 12th 2011, multiple sources indicate that there are rumors of the JCC site being close to SOLD. While we do not know who the interested parties are, the Land Use Committee will continue to monitor this and welcome the new owners to the neighborhood.  The Land Use Committee is interested in being a cooperative party with the new owner(s) provided the voice of the community as described in the Vision Plan are being met.