About 150 people packed into the meeting room at Wedgwood Presbyterian Church for the WCC’s January 2011 general meeting, co-hosted by Seattle Parks and Wedgwood Parks.  The purpose of the meeting was to formally announce the WCC’s recommended site for park acquisition, the Morningside Substation, using legislatively approved funds from the 2008 Parks and Open Green Spaces Levy.

Wedgwoodians began showing up around 6:45 in anticipation of the meeting and to get their hands on the new Wedgwood t-shirt.  Kurt Westman, the President of the WCC, kicked off the meeting with and overview and introductions before the presentation began.  Chip Nevins, Acquisitions Planner for Seattle Parks, shared some background on the 2008 Parks and Open Green Spaces Levy followed up by the Wedgwood Parks committee describing the evaluation process and the merits of the Morningside Substation, located at the NW corner of the 35 Avenue NE and NE 86th Street intersection. 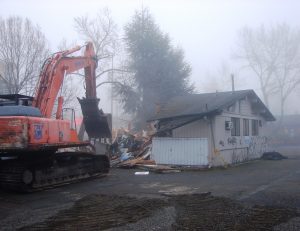 Demolition of the building on site at 8605 35th Ave NE took place in November 2013 so that the site could be acquired for a future park.

Holding true to Wedgwood’s principles of support for local businesses, the primary concern of attendees was what will become of CC & Company, the salon that has been renting on the Morningside Substation for about 20 years.  The were represented in attendance as was the building owner who has a temporary ground lease with Seattle City Light.  Based on the time line for park acquisition and development, the earliest CC & Company would need to relocate would be in 2013 provided funds can be obtained to design and develop a park.  Furthermore, Wedgwood Parks explained they had committed themselves to helping CC & Company, to their greatest extent, when it becomes time.  This sentiment was shared by many in attendance too.

Towards the end of open questions, Chip Nevins of Seattle Parks Dept. asked for a show of hands to see who is in favor of Parks acquiring the Morningside Substation.  An overwhelming majority of those in attendance raised their hands in support of Parks acquiring new park space within the Wedgwood business district.  Don Harris, Property and Acquisition Service Manager at Seattle Parks, spoke towards the end meeting and complimented the Wedgwood neighborhood on its passion and community engagement.  The Wedgwood Community Council couldn’t agree more with Mr. Harris.  Not only were Wedgwoodians concerned about CC & Company but also respectfully listened and responded to each other throughout the meeting.
Stay tuned for the next steps for park acquisition and development.  We will be applying for a Small & Simple Grant through the Department of Neighborhoods, which we will need community participation and provide a financial match.  Please email » Wedgwood Parks if you would like to get involved.

One Reply to “Wedgwood Parks Meeting a Success!”