﻿﻿Our Lady of the Lake (OLL) recently installed four Proposed Land Use Action signs along the church’s frontage to publicly announce a new project.  According to Master Use Permit #3011918, OLL is proposing a “7,037 sq. ft. expansion for a new gymnasium” with new restrooms and storage space.  No change is proposed to the existing parking.  However, more information can be gleaned from the project overview on the school’s website, which describes the project more completely:

“OLL hopes to build a ‘Gym/Event Center’ which will better serve the growing needs of both the Our Lady of the Lake parish and school. The hope is to offer a facility with a renovated kitchen, better lighting and sound system, additional restrooms, and a place where CYO athletic games can at last be played. Overall, it offers a place with greater versatility as well as aesthetic and appealing aspects which reflect the growth happening within the OLL parish and school.”

In October 2011, it appeared that the City was requiring the project install sidewalks and curbs along NE 89th Street.  Its not clear where the negotiations are currently with OLL and the City on this issue.  Further information can be found on the project’s January Update, where they say that construction will hopefully begin this summer (2012) although they still appear to be a little shy of the project’s total $2.7 million cost. 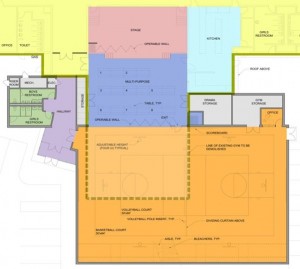 At the moment, not much more is known about the project although the Wedgwood Land Use Committee and the project manager have begun to correspond.  We hope to be able to provide a few more details on the project in the relatively near future.

What are your thoughts on the project?  If you’re excited about it, then donate HERE (there’s a $50,000 match grant challenge running through February 15th).  If you’re not necessarily excited, we’d love to hear your comments below.