As the school year comes to a close, schools are ready with plans for building maintenance to be done over the summer.  At Eckstein Middle School, 3003 NE 75th Street, one thing that needs to be done is to make provision for more students, as Eckstein is already bursting at the seams.

The School District has engaged an architectural firm to build a new portable classroom at Eckstein this summer.  Because the Eckstein school building has been designated as a historic landmark since 1981, any changes on-site have to be approved by the City of Seattle’s Landmarks Board, which operates under the Department of Neighborhoods. 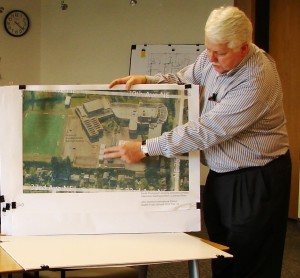 At the Landmarks Board meeting on Wednesday, May 16, architect Stuart Stovin of Harthorne Hagen Architects made a presentation about the Eckstein site and how a new portable would fit in. The portable building will be painted to match the existing portables and though new, it will be built to match the existing portables in style.  An additional consideration of the Landmarks Board was whether the new portable would affect the view of the main building’s historic facade or change it in any way.  Mr. Stovin showed schematics about the placement of the portable which indicated that it will not be visible from any public right-of-way, so the portable will not affect the integrity of the main building in its historic designation.

A new portable classroom at Eckstein must also be placed so that it does not block fire truck access to the buildings, or block public access to Eckstein’s sports fields.  After considering all these factors, the Landmarks Board voted unanimously to accept the portable plan.  One of the Landmarks Board members happens to be an Eckstein parent.  She is glad that the portable won’t take away any needed parking spaces – so that she can get in to watch her child compete on the sports fields. 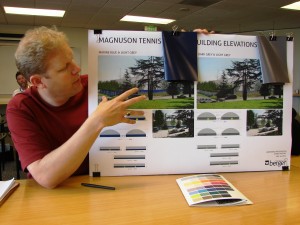 Other brief presentations at Landmarks Board on Wednesday the 16th were for the University Heights Community Center and for the new tennis center at Sand Point. The former Sand Point Naval Air Station site is now a Historic District, preserving buildings, landscaping, monuments and historic views. The Landmarks Board approved paint colors for the Sand Point tennis center in a coordinated plan for the whole site.

The University Heights Community Center at 5031 University Way NE is in a former school building which is 110 years old.  Beginning in June the siding will be repaired and the building will be painted green.  The Landmarks Board commented that other former school buildings are each painted a unique color (Phinney Neighborhood Center is blue and Wallingford Center is red) so they approved the choice of green paint for University Heights.

The Landmarks Board members are volunteers with architectural and real estate backgrounds, serving under the Department of Neighborhoods.  The meetings are generally held twice per month and are always open to the public.  The presentations about buildings are a free education in Seattle’s history and architecture.  The current nomination reports and the standards of historic nomination can be found at: http://www.seattle.gov/neighborhoods/preservation/landmarks.htm