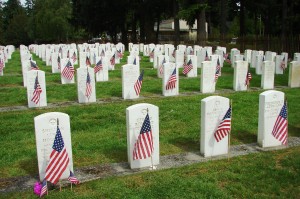 In 1881 a Wedgwood resident wrote a letter to the editor of the Daily Intelligencer newspaper, telling of a patriotic Fourth of July celebration.  The celebrants that day were mostly Civil War veterans and their families.  Although Washington Territory did not send troops to fight in the Civil War, after the war veterans came to the Puget Sound area because of the offer of free land as credit for time served in the Union Army.    Wedgwood’s first Fourth of July celebration took place at Wedgwood Rock, which was then part of the homestead claim of William Weedin. 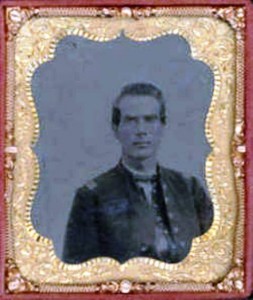 Although the name of the letter-to-the-editor writer was not given, the letter may have been written by a family member of the schoolteacher, Viola Kenyon.  Viola was the wife of Capt. DeWitt C. Kenyon, Michigan 13th Infantry, pictured at right in his Civil War uniform.  The letterwriter described what was then called Lone Rock and told how the picnickers had brought a ladder so that they could climb up and see the view from the top of the Rock.   The letter proudly told of the local school and its students, including Martin Weedin (William Weedin’s nephew) who read aloud the Declaration of Independence as part of the patriotic celebrations.   That 1881 Fourth of July picnic day concluded with the singing of the Star Spangled Banner.

More about Wedgwood’s earliest settlers is on Valarie’s history blog See articles “Wedgwood Rock:  Picnic in 1881,” and “Homesteading in Wedgwood after the Civil War” to learn about the Kenyon and Weedin families, who were among the first Wedgwood residents to celebrate the Fourth of July.