A new branch of KeyBank at 7307 35th Ave NE opened Monday morning, July 30.   The big Grand Opening Celebration will be on August 25, and until then, everyone is welcome to come and put their name into the raffle box for prizes. 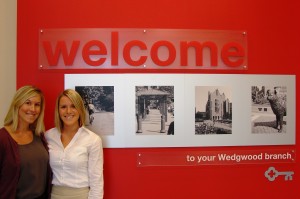 One of the main reasons why KeyBank chose to open at this location is because of the already-existing customer base in the neighborhood, lacking a nearby branch.   Another reason is because of KeyBank’s commitment to remodeling and reusing former retail spaces. This is a “greener” alternative to new construction, since remodeling uses less energy and materials.  KeyBank has used LEED Gold Standard guidelines in the remodel at 7307 35th Ave NE.   In a recent article in the Puget Sound Business Journal, KeyBank’s Seattle-Cascades District President Rick Wirthlin explained that the bank has made adding branches their main strategy for growth, and the Seattle-Cascades region is now the bank’s largest outside of their home base in Cleveland. 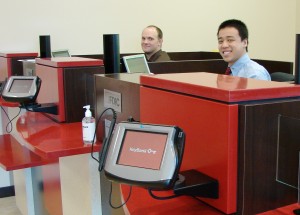 According to Ms. Chelan Shero, who has been appointed branch manager at 7307 35th Ave NE, the motto of this branch could be “the face-to-face bank.”   Unlike other banks which are moving to on-line access-only, KeyBank is expanding and building more branches with client services on-site.   The 7307 35th Ave NE branch will have three teller windows open at all times, and will have client service specialists who can connect customers to other business partners such as mortgage lending, investment management and merchant services. 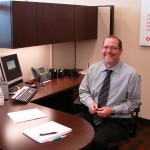 On the exterior, the new KeyBank has an ATM and a night drop.   Additional features of the new KeyBank branch are a conference room to accommodate client meetings, and a photo wall.   Currently a collection of images by Seattle photographer Scott Manthey of ImageArts depict scenes from the UW campus, University Village and the Burke-Gilman Trail.

The new KeyBank branch will open at 9 AM on Monday morning, July 30.  Monday-through-Thursday hours are until 5 PM, and until 6 PM on Friday.   The branch will be open 10 to 1:30 on Saturdays.  The big Grand Opening Celebration will be in another month, August 25, and until then, everyone is invited to put their name into KeyBank’s raffle box.   Prizes to be given out on August 25 are a trip to Victoria, B.C. and a $500 Key Possibilities card.