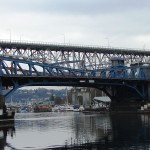 Fremont and Wedgwood are two neighborhoods of Seattle which have completely different histories.  Fremont developed along with the earliest years of the City of Seattle beginning in the 1850s; Wedgwood did not really get going until the 1940s.  What are the features that Fremont has, which Wedgwood doesn’t?  This week on Valarie’s history blog we explore reasons why Fremont became a neighborhood so early.  But one thing the two very different neighborhoods have in common, though, is the Burke-Gilman Trail.