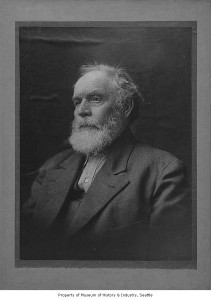 In 1888 Joe Surber lived in what later became Laurelhurst.

It is hard to believe that Wedgwood’s main commercial intersection at NE 85th Street could ever have been vacant land.  The present QFC grocery store, built in 1959 as a Tradewell, was the first building ever to be built on the site.  That corner had a long history of ownership by people who did not live in Wedgwood.  One early owner of the site only came through Wedgwood on hunting expeditions in the company of Joe Surber who was the original resident of what became Laurelhurst.  This week on Valarie’s history blog, read the story of the ownership of the QFC site and how Albert Balch, developer of Wedgwood, finally acquired the property in 1942.

You can find out more about the Yesler Swamp Trail on their webpage which tells of this wonderful natural area on Union Bay in what is now Laurelhurst – formerly Town of Yesler.