Update 2: Site clearing has begun and the trees are down.  Here’s a Photosynth photo (requires Microsoft Silverlight plugin) of the site on February 24, 2013.  Today, fencing went up around the site and the contractors excavator and trailer were placed on site.

Reminder 1: While the property is moving closer to acquisition by the Parks Department for a park, many have asked what the park will be and when it’ll be open.  This is a great question that cannot be answered at the moment.  As we’ve written about before, we applied for a grant to work with the Parks Department to come up with a park design.  However, given the Parks budget, there is a moratorium on new park development.  Until their maintenance budget is sorted out (…we’ve heard rumors of a levy for park maintenance in the future), we cannot design the park and therefore it cannot yet be officially a park.

UPDATE 1:  Since we originally wrote this post, we have received more details on the upcoming cleanup from Bill Devereaux, Manager of the Environmental Management and Compliance Unit with Seattle City Light. We’ve taken editorial privilege to add bold text to highlight important items, a photo of the trees in the northwest corner of the parcel, and editorial notes in [brackets] throughout for greater clarification.  The trees will largely be cleared.

I apologize for the time it has taken to get back to you on your questions.   The project is a work in progress.  Hopefully the following addresses the questions you earlier sent to me. 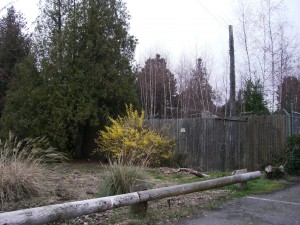 Grove of trees in NW corner of the lot that will be removed as part of cleanup.

The cleanup work is planned for the period February 18 through March 8.  Due to the nature of the work, it may be somewhat punctuated during that time frame.  The nature of the work will be to remove roughly the upper 18 inches of soil and the concrete pad from the western half of the property (roughly the unpaved portion).  This was the area used by City Light as a substation in the past.  In addition, there is an area in the northwest corner of the paved portion that will require soils removal down to approximately 5 feet.  Note that most of the trees will be removed in order to ensure a complete cleanup. The affected area will be fenced during the removal activities.

After the removal work City Light plans to bring the excavated west area back to grade with clean fill and a mulch of bark and wood chips.  The excavation in the asphalt area will be brought to grade with clean fill and topped with gravel.  The fencing around the former substation will be removed and the property will be open.  As Parks has not completed their plans for the property, we will not be replanting in order to leave them with a clean slate in which to work [Editorial Note: Letter from SCL linked to below states that replacement trees will be planted.].

The building on the site is the personal property of the former lessees, and they have been asked to remove the building [Editorial Note: We are not clear when the building will be removed and if SCL or Parks has given a deadline for its removal.  However, the owner had been trying to give it away for free on Craigslist earlier].  When the cleanup is completed and the building removed, the property will be transferred to the Parks Department.  Any requests for landscaping between the transfer and the future park development should be referred to Parks [Editorial Note: Replacement trees are reportedly going to be installed though by SCL per the letter linked to in the next paragraph].  We have been coordinating with Chip Nevins at Parks. 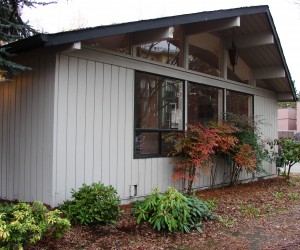 Original Post: Wedgwood Community Council (WCC) is pleased to report that the Morningside Substation site, at the northwest corner of 35th Ave NE and NE 86th Street, is about to undergo a radical transformation. The site, which is owned by Seattle City Light (SCL), is home to the now-vacant CC & Co. salon building (the salon was there under lease, and the CC & Co. hair stylists are now working in other locations around Wedgwood.)  SCL is in the process of transferring ownership of the site, which is about a third of an acre in size, to Seattle Parks and Recreation (Parks) so that it can be turned into a new park for our community (you can learn more about the park here).

Before the transfer can take place, SCL must perform environmental remediation so that Parks receives a clean site. The long-ago home of a gas station, testing has revealed that the top layer of the site’s soil contains contaminants and must be replaced with clean topsoil. In the coming weeks Wedgwood residents will notice construction fencing going up, the salon building coming down, and the site’s surface being stripped. Unfortunately, due to the nature of the contamination, the small stand of trees on the northwest corner of the site will become a casualty of this process.

WCC has contacted SCL regarding the remediation effort and its timeline, and will report details as they become available.  Once the cleanup and title transfer are complete, Parks will await funding to begin park development. WCC has asked that in that interim period the parcel be seeded in lawn and open to the public so that our community will have attractive, usable open space in its core while we wait for funding for the design and construction of our future park. Please stayed tuned for more exciting news in the development of Wedgwood’s newest park!