Home »Schools»What's in a Name? 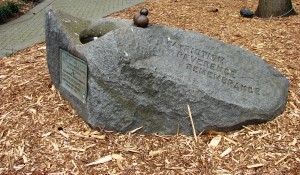 Where did the names Decatur, Thornton Creek School, and Wedgwood come from?  The history of school names in Wedgwood is given this week on Valarie’s history blog, Wedgwood in Seattle History.  The name “Decatur” refers to a significant event in Seattle history in 1856, but is now a name not well-known.  A forlorn-looking plaque on a rock at Third & Jefferson, on the south side of the King County Courthouse, was placed to commemorate the Battle of Seattle which was won by the sloop-of-war USS Decatur.

With the passage of the school levy in February, it is possible that monies may be used to build a second school building at NE 77th Street & 40th Ave NE, present site of Thornton Creek School at Decatur.  With two separate schools operating side-by-side, there will be a need to name the new school to give it a unique identity.  What might be some appropriate names for a new school in “eastern” Wedgwood?  Valarie gives her name ideas in the blog article.