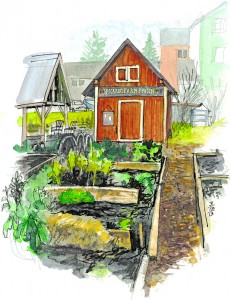 Seattle’s community gardening program which spread nationwide is featured this weekend on Seattle Sketcher, a feature of the Seattle Times newspaper.  “You can’t spell P-Patch without Picardo” because the Picardo family’s farm became the first P-Patch in 1973.  The P-Patch program is still going strong all over the city of Seattle, with new sites being added each year.

This fortieth-anniversary year of the P-Patch will be full of events and commemorations, and volunteers are invited to get involved.  More on how the Picardo family came to have a farm in Wedgwood is on Valarie’s history blog.