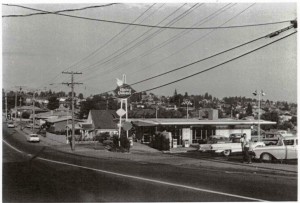 In 1960 Wedgwood had NO banks, which seems hard to believe today.  Wedgwood did have a number of small shops and cafes which were locally-owned.  There was a drugstore with a real soda fountain, and a hardware store which also sold specialty food items and rented out ski equipment.  The Wedgwood Community Club which was active in the 1950’s and 1960’s was successful in preventing a hamburger drive-in from being built at the corner of NE 84th Street.  But those who really wanted a hamburger could head on down to Dairy Queen which was on the Safeway parking lot at NE 75th Street.  Read all about it this week on Valarie’s history blog.