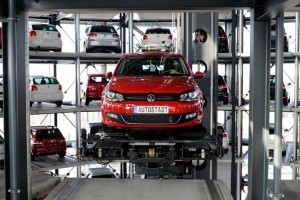 Vertical car towers like this one in Germany, eliminate the need for spread-out car lots.

When you drive along Lake City Way NE, what do you see?  For more than sixty years the Bill Pierre family has owned and operated car sales lots on fourteen acres along Lake City Way from NE 110th to 135th Streets. That’s a lot of acres of cars, and car lots have dominated the view. Lake City itself is a neighborhood of car-oriented businesses, from Dick’s Drive-In with its big parking lot in front, to Bank of America with its parking lot and drive-up window.  Soon a change will come: the Bill Pierre family no longer needs all those car lots and they are considering options for redeveloping the property.  New buildings replacing the fourteen acres of car lots along Lake City Way NE will change the structure and character of the Lake City neighborhood. 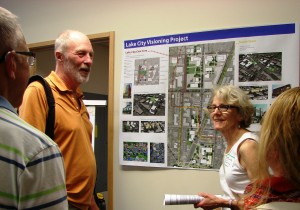 In 2012, after the Pierre family consulted a real estate advisor, community meetings were held to discuss the function and siting of buildings which could replace the Pierre car lots. For the past year, graduate and undergraduate students from the Department of Urban Design and Planning at the University of Washington, have held community-engagement meetings to help envision the future of Lake City Way NE. The process has been coordinated by Marty Curry, a Wedgwood resident and UW professor whose UW students, through the Lake City Way Visioning Project, have been learning citizen engagement, collaborative planning, and local sustainability policies and practices which could impact the future of the Lake City neighborhood. 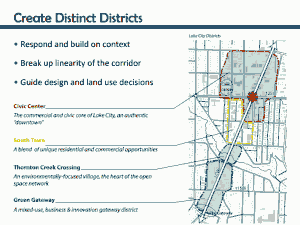 Some of the goals of the Visioning Project have been to clarify and strengthen the identity of Lake City, and emphasize the public impact of new developments. It is rare to have an opportunity to envision what might be built, which could transform the neighborhood into a magnet for new housing, businesses, services and park spaces. The Visioning Project began by dividing Lake City Way NE from NE 110th to 135th Streets into zones with specific purposes. At the point where Thornton Creek’s South Fork passes under Lake City Way at about NE 117th Street, we know that environmental restrictions would preclude development close to the creek. The Visioning Project proposed that the creek be emphasized with open space which could be named Pierre Legacy Park, with creek observation platforms, walking areas and a pedestrian mall leading to nearby small businesses.

Other zones proposed in the Visioning Plan include South Town, so called because it is located just south of the main intersection of NE 125th Street and Lake City Way NE.  This area of odd-shaped land parcels could accommodate mixed-use residential and commercial development.  The South Town zone would be a convenient place to live since NE 125th & Lake City Way NE is a major intersection for bus travel and transfer, with lines traveling in all directions. 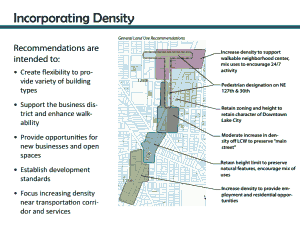 During the Visioning process there was much discussion about the “trade-offs” of density.  One example of a trade-off is when a developer makes public space available, such as a set-back from the street or walking trails along the property, then the developer is compensated by being allowed to add more floors to the building. The advantages for the community are the gains of more appropriately sited buildings and the open space, trails, outdoor art, or other amenities agreed upon.  Population density of apartment or condo living also helps support local businesses, so a community can become more walkable with small shops in or near residential buildings.  Attractively-sited buildings with businesses at ground level could help Lake City become less car-dependent. 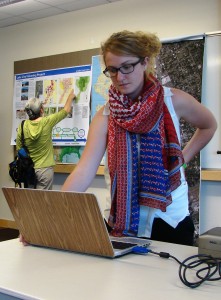