UPDATE: According to Jim Curtin with SDOT, the “Complete the Street” project would likely go to construction in 2015, assuming the Council approves the funding.

Over the last couple months, the City Council and Mayor have been working out exactly what to do with all the cash raised from the school-zone speed light cameras.  They’ve generally agreed that the money should go to improving safety projects around schools, but the exact structure of the funding mechanism was in debate.  However, recently the Council ended up creating a separate fund exclusively for these funds and these projects.

Yesterday, the Mayor proposed $14.8 million in safety projects from this special fund (see list of projects below).  Of the projects proposed for funding, several occur around Wedgwood!  The proposed $14.8 million funding does still need to be approved by Council and according to the Seattle Times, the Council already approved $2.9 million, would be asked for $3.3 million this fall, and $8.6 million next year.

Of the projects in or near our neighborhood, perhaps the largest and most exciting project is one that a former WCC trustee and Wedgwood Elementary PTA President, Katie Traverse, has championed for many years.  Katie’s project, which ended up being titled “Complete the Street,” would construct new sidewalks and pedestrian improvements from the recently improved Ravenna Ave NE up to Wedgwood Elementary School along 28th Avenue NE , NE 83rd Street, and NE 85th Street.  You can download the 60% plans HERE. Thanks to $730,000 from this funding and a $439,000 grant from the state, the City will be able to finally construct the Complete the Street project bringing much needed safety improvements to Wedgwood Elementary.  This is a HUGELY successful project and long-term effort by Katie Traverse and everyone associated with it.

In addition to Katie’s project, other pedestrian and safety improvements for nearby schools include:

Many other safety improvements are proposed throughout the City where they’re desperately needed as part of the Mayor’s announcement, putting to good use the funds collected by those that fail to drive the speed limit through school zones.  So when you get your first speed camera ticket for going too fast along NE 75th Street in front of Eckstein Middle School, rest easy knowing your money will be spent to make it easier and safer for kids to walk and bike to school. 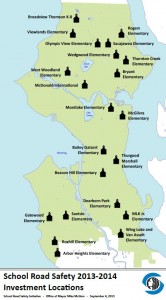 Here’s a smattering of additional information for those interested in reading more.

One Reply to “Pedestrian Improvements Coming to Wedgwood-area Schools”