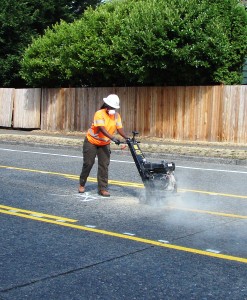 On Saturday, August 24, an SDOT worker was grinding out the dashes of the former center line on NE 75th Street, because a new, center turn lane was created.

It’s been a couple months now since SDOT finished up the channelization of NE 75th Street.  We’ve all had a chance to adjust to the new marked lanes, bike lanes, and turning lane.  We’ve had a chance to use these lanes while commuting to work, getting to/from UW Husky football home games, dropping kids off at Eckstein Middle School, and more.  So, we thought it might be a good time to hear what you think.  We have a quick poll below we’d love you to fill out!

You’ll recall back in April, the City of Seattle announced the NE 75th Street Road Safety Corridor Project in response to safety concerns raised by neighbors and a terrible and well publicized vehicle/pedestrian collision resulting from an impaired driver who has plead guilty to DUI.  This project was originally presented by the Mayor’s Office at a meeting organized by the WCC and Ravenna-Bryant Community Association at Eckstein Middle School with community, school, and transportation advocates with City staff (Seattle Police, Mayor’s Office, and SDOT) to identify opportunities for making NE 75th Street safe for everyone.  The City formally presented the NE 75th Street Road Safety Corridor Project to the community at a very well attended community meeting on April 2nd, hosted by the RBCA.

In April and early May, SDOT kicked off the NE 75th Street Road Safety Corridor Project with 3 community meetings to listen to the greater community and identify specific concerns along the broader NE 75th Street corridor.  SDOT requested the help from WCC and RBCA to schedule these meetings when and where they would be most appropriate.  As a result, we scheduled 3 community meetings (1 in Wedgwood, 1 in Ravenna-Bryant, and 1 in Roosevelt) at different times of the day and on different days of the week to make sure people had a chance to attend a meeting and share their concerns.  Approximately 20-40 people attended each meeting and pointed out problem intersections, dangerous crossings, and more on streets all over NE Seattle, from approximately I-5 to the west, 45th Ave NE to the east, NE 95th St to the north, and NE 55th St to the south.  A map summarizing this community feedback was compiled by SDOT.

Using this information, SDOT went back and designed four options for NE 75th Street.  The City announced these four options at a press conference on July 17th where Dongho Chang, the City’s Chief Transportation Engineer, announced that the City’s preferred option was Option 4.  This Option included 2 travel lanes (east and west), a central turning lane, and two outer bike lanes.  Parking would be removed from both sides of NE 75th St under this preferred option.  Of the 4 options, a poll hosted by the Ravenna Blog showed that 61% of the 274 voters also preferred Option 4.  Working with the City again, the WCC and RBCA scheduled 2 more community meetings (1 in Wedgwood and 1 in Ravenna-Bryant at different days and times) for SDOT to present the four options and listen to neighborhood concerns.   Approximately 20-50 people showed up at each meeting where SDOT heard from both voices of support and opposition on the preferred design.  Of those issues that were of most concern to the community was the removal of all parking on NE 75th St for bike lanes.  In fact, at one point during the 2nd meeting, things got slightly heated.  But, after listening to the community, SDOT unveiled the final design which was a modified version of Option 4 that maintained some bus parking on NE 75th Street in front of Eckstein Middle School.

Things just got real at #75th mtng as attendee tries to take over meeting. Others tell him he’s out of line. pic.twitter.com/GI6x6g9YZg

Now that you’ve had a chance to adjust to the new NE 75th Street, we thought it might be nice to hear what everyone thinks.  Or at least those who visit our website…  So, we’d be grateful if you indulged us and voted in our short poll or leave a comment below.  Thanks in advance!