Update 11:The SPS has posted its agenda for its November 20th School Board Meeting in which there are 15 amendments proposed by the directors.
Update 10: For those who missed yesterday’s (Wednesday’s) SPS School Board Meeting discussion on the current growth boundaries proposal, the Seattle Times has a story and news coverage was provided by King 5 and Q13.  Also, we summarized it as best as we could in a few tweets last night (see below).

I would point out that Wedgwood/Eckstein have been receiving a fair amount of news coverage for the issues associated with the new school boundaries for our neighborhood students. However, there seems to be shared frustration for similar reasons (unwalkable boundaries) in nearly every neighborhood across Seattle (Maple Leaf especially in the North and nearly all of South and Southeast Seattle.) Let’s keep our fingers crossed that any amendment(s) proposed addresses as many of these concerns as possible where neighborhoods may not have as vocal or organized opposition.

.@RavennaBlog in short, didn’t sound like a single board member approves of anything in latest plan. Many talk about restoring walk zones.

.@RavennaBlog many amendments to be proposed. Wknd sessions with SPS board important to vet amendments with parents. SPS staff will be busy. — WedgwoodCommCouncil (@WedgwoodCC) November 7, 2013

.@RavennaBlog inferred that staff came up with it due to concerns in version 2. Gave too much to some w/ unintended consequences for all. — WedgwoodCommCouncil (@WedgwoodCC) November 7, 2013

@WedgwoodCC @RavennaBlog it looked like at least five members would vote for amnd to bring WW back to E. May need encouragement to work tog.

.@LMNacht @RavennaBlog looked like 7 of 7 would vote for an amendment to pay for staff to read through their email inbox for them. — WedgwoodCommCouncil (@WedgwoodCC) November 7, 2013

Update 9: Apologies for how long this post has become, but we wanted to share an email we received from one of the 46th District Representatives, Gerry Pollet, to the School Board and Superintendent Banda.

Dear Board members and Superintendent Banda, As with many of my neighbors, I was also shocked by this last minute change to the assignment plan proposals, which had never been presented at a public meeting. The proposal would dramatically undermine much of the benefits achieved by the District in adopting a neighborhood assignment plan. It is unacceptable that students immediately north of 75th – within sight of Eckstein – would be assigned to Addams. When I heard from neighbors about this change to the Plan, I reviewed the materials prepared for the Board’s meeting and was dismayed that they do not disclose this impact in plain language. One has to first review the detailed map and wade through the bureaucratic lingo to piece together that this dramatic change to our community would be put in place in September. Students in the Wedgwood Elementary assignment zone between NE 75th (where Eckstein is) and NE 95th, would be walking to school where there are no sidewalks and a very dangerous arterial on a steep hill to cross. Ironically, our community has been working with the City to improve the crosswalks, signals and speed on NE 75th to allow students to safely cross to and from Eckstein. We can reduce transportation costs and increase safety by amending this plan to resume having Wedgwood Elementary feed Eckstein. I am all too well aware of the incredible overcapacity problem at Eckstein, coupled with ancient portables and other capacity issues. This latest proposal is not a solution for that problem. As you know, along with my colleagues, I have worked to bring significant funding and resources to reopen and renovate schools to address the overcrowding across NE and N Seattle. We will continue to work with the District to procure funds – and hope that the District will work with the City and your legislative delegation to obtain new properties near the core of our overcrowding problems, e.g., Roosevelt Reservoir and Lake City Pierre properties. The community south of NE 50th Street had to petition and organize to be kept together with their neighborhood assignment to Bryant Elementary in the last set of decisions. It is disheartening that this effort and commitment to that community would be ignored again in the latest boundary change proposal – again without having provided the community a chance to comment at the meetings. The repeated need to organize communities to have the same discussion about integrity of neighborhoods and stability in assignments undermines the excellent progress made by the District in the School Assignment Plan. Gerry Representative Gerry Pollet 46th District (Northeast and North Seattle, Lake Forest Park and Kenmore)

Update 8: The Ravenna Blog has an new post up with great and timely information (as always). First, Seattle School Board-member Harium Martin-Morris has provided details regarding an amendment that he and fellow board member De Bell will bring forward within email responses that he has sent.  As Martin-Morris explains in these emails, their amendment would…

*   Assign NE APP students to the new James Addams Middle School starting in 2014 *   Have a maximum of 3 classes per grade level at James Addams Middle School *   Assign others APP to Hamilton until Wilson Pacific  Middle School is online.  At that point Hamilton would also go to the 3 classroom per grade and all others go to Wilson Pacific That would mean that the middle school and elementary attendance areas in the NE would go back to October 16th revision with some minor changes basis on community input.

Terri Green, the Wedgwood PTA is encouraging those who agree with Martin-Morris and De Bell’s amendment to email the entire school board as 4 of the 7 board members need to support it in order for it to pass. Second, the Ravenna-Bryant Community Association (RBCA) has sent an email letter to the School Board requesting the them to reconsider the boundaries within their latest growth boundaries proposal, described below. Lastly, the Ravenna Blog will be providing a live-blog (if she’s able) within her blog post.  Alternatively, you can watch the upcoming School Board Meeting TONIGHT (November 6th), streamed live starting at 4:15PM (see AGENDA) or on Channel 26 (Seattle Public School TV).
Update 7: The WCC has written a formal letter of concern to the Seattle School District Board of Directors regarding the “Growth Boundaries for Student Assignment” Board Action Report (BAR), being presented at tomorrow (November 6th) Board Meeting.  You can see the letter HERE.
UPDATE 6: A Facebook group called Keep Wedgwood Neighborhood Kids at Eckstein has been created for those working to keep Wedgwood ES students on track for attending Eckstein MS.
UPDATE 5: The Ravenna Blog, who happens to be a parent of a kid at Wedgwood ES, will be attending tonight’s “Call to Action Meeting” starting at 6:30PM at the Wedgwood ES library and will try to live-blog it on her site for those unable to attend.  You can read her excellent-coverage-as-always of the District’s proposal HERE.
UPDATE 4: A group called “Voice of NE Seattle Students” had been reported in some e-mail strings as submitting a petition to the District supporting many of the proposed changes. In a post on their Facebook page, however, they clarify that while they support equitable populations between Jane Adams MS (JAMS) and Eckstein MS, they do not support the District’s changes as they’ve been proposed.

UPDATE 3: You can read the SNAPP (Seattle North APP) PTA statement on the new proposal to co-locate the APP program at two locations (Eckstein and Whitman) HERE.  Note: they’re not supportive of it.

UPDATE 1: There is a survey that the Seattle Public School PTSA has put together on the growth boundaries planning process.  Click HERE to take the survey.

Truth be told, the Wedgwood Community Council cannot keep up with the seemingly continuous changes from the Seattle Public School District that affect NE Seattle schools. With that said, there are times that proposed changes or decisions from the School District could have potentially significant impacts to Wedgwood residents that we think need to be highlighted. 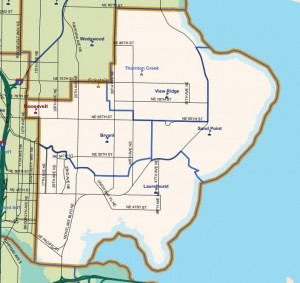 On Wednesday, November 6th, the School Board will hear recommendations on short-term (next year) and long-term (2020) changes to school boundaries.  There are minor revisions to the elementary school boundaries.  But, for Wedgwood residents, and specifically for families who are at Wedgwood Elementary, the big news within these changes is that those within the Wedgwood Elementary attendance area would now be attending Jane Addams Middle School and not Eckstein Middle School.  This means that families who live on the north side of NE 75th Street and generally west of 35th Ave NE would be going to Jane Addams.  That’s right, a family who lives on the north side of NE 75th Street would need to travel 1.8 miles (as the crow flies) to Jane Addams instead of walking across the street.

As we understand it, a block of rising grades 6-8 would be moved to Jane Addams (temporarily located at John Marshall for 2 years) beginning next year (2014/2015) to provide immediate relief from over-enrollment pressures at Eckstein and the District’s proposal to move 1 of 2 North Seattle APP programs to Eckstein (See Kristin’s comment below for clarification).  Here are the 2 “major changes” that would effect Wedgwood area schools from the District’s enrollment planning website:

In the past, the Wedgwood Community Council has not taken positions on issues such as this but has tried to play a neutral role of providing information and making residents aware.

For those interested in providing feedback, you can attend the November 6th meeting and/or contact the School District regarding the changes.  The District will be making its final decision on November 20th.