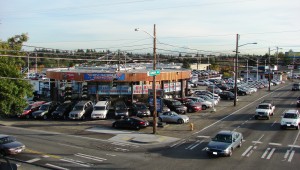 Aurora Avenue (at right) and North 130th Street is the proposed site of a new North Precinct Police Station. There presently is a car leasing business on the corner. The intersection has good access to major arterials.

This year property at the southeast corner of North 130th Street & Aurora Avenue North was identified as an excellent site for a new North Precinct Police Station.  At present there is a car leasing business and some unused buildings over two property parcels.  Now a third parcel containing an office building has become available, giving an unprecedented opportunity to acquire the entire block, a total of 4.1 acres.  At hearings in December 2013 the Seattle City Council will consider authorizing purchase of the site to build a North Precinct Police Station.

On Wednesday, December 4 at 9:30 AM there will be a public hearing and the City Council Government Performance and Finance Committee will discuss the property approval.  On Thursday, December 12 at 2 PM the committee will vote.  On Monday, December 16 at 2 PM, the Full City Council will take final action on the legislation. All meetings are open to the public and are held on the second floor of City Hall at Fifth & Cherry in downtown Seattle.

The present North Precinct Police Station was built in 1984 at 10049 College Way North, near North Seattle Community College.  The station is too small and has environmental issues as it is on swampy ground, part of the headwaters of the South Fork of Thornton Creek.  The new proposed site at 130th & Aurora will accommodate future growth and has excellent access to I-5 and to major arterials.  More info about the plan can be found here.