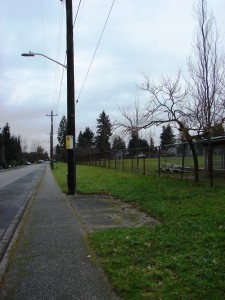 Northward view along 40th Ave NE: this view will change dramatically when a new school is built at the corner of NE 77th Street.

In the coming two years there will be enormous changes in Wedgwood along 40th Ave NE as construction will begin for a new school building at the corner of NE 77th Street.  Using Building Excellence Program levy funds (BEX IV) an additional school, to be operated separately, will be built alongside the present Thornton Creek School at Decatur, 7711 43rd Ave NE.

It has been more than sixty years since a new school building has been constructed in the Wedgwood neighborhood.  With Nathan Eckstein Junior High in 1950 and Wedgwood Elementary in 1953, Stephen Decatur Elementary was the last, opening in September 1961.  For many years Decatur School was home to an Alternative Program so in 2008 the program name, Thornton Creek, became the identifier.  (Read here on Valarie’s history blog about the school names.) 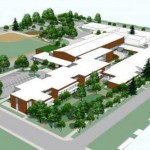 Here is a link to the site for tracking the progress of the new school, scheduled to open in September 2016.  Because it had been so many years since a new school was built, there was much interaction with present-day design processes, to include traffic and transportation studies, and planning for utilities.  More planning and construction updates will be posted as they become available.  Groundbreaking is currently scheduled for January 2015.