The Safe Roads Awareness Week is a week of events organized by several stakeholders (see below for list), including the Wedgwood Community Council, to bring attention to the need for safe roads for all users and policy that supports that goal.  The week kicks-off on March 25th with a memorial walk and rally on the one-year anniversary of a tragic drunk driving crash at NE 75th Street and 33rd Ave NE, near Eckstein Middle School, that took the lives the Judy and Dennis Schulte and seriously injured their 10-day-old grandson, Elias, and daughter-in-law Karina Ulriksen-Schulte.  Events throughout the week will bring attention to DUI prevention, distracted driving prevention, safe speeds, and sharing the road.  The week will conclude on Friday, March 28, with the official launch of the Lake City Way Traffic Safety Project.  A full list of the events during the Safe Roads Awareness Week are available on a printable flyer below. 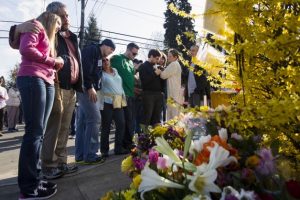 We will begin gathering at Top Pot Doughnuts (6855 35th Ave NE) but will start the walk around 3:15PM and end at the crash site at NE 75th Street and 33rd Ave NE.  A moment of silence will be held at approximately 4 PM to remember Judy and Dennis Schulte.  A short rally will follow the walk at approximately 4:15PM on the Eckstein Middle School front lawn.  Members of the community are encouraged to participate.

Following the rally, Mothers Against Drunk Driving will be hosting their free Power of Parents, It’s Your Influence™ program from 5:15-6PM in Room 111, which was developed with Pennsylvania State University’s Dr. Robert Turrisi, and is based on over two decades of underage drinking research. All participants will receive a parent handbook and additional resources to provide them with the communication tools to talk with their teens about alcohol.

WHO WILL BE PRESENT: 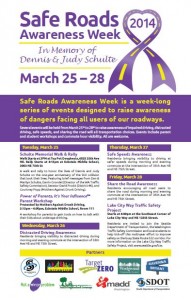 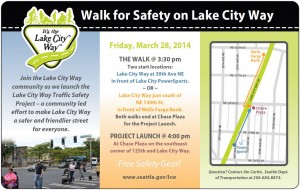