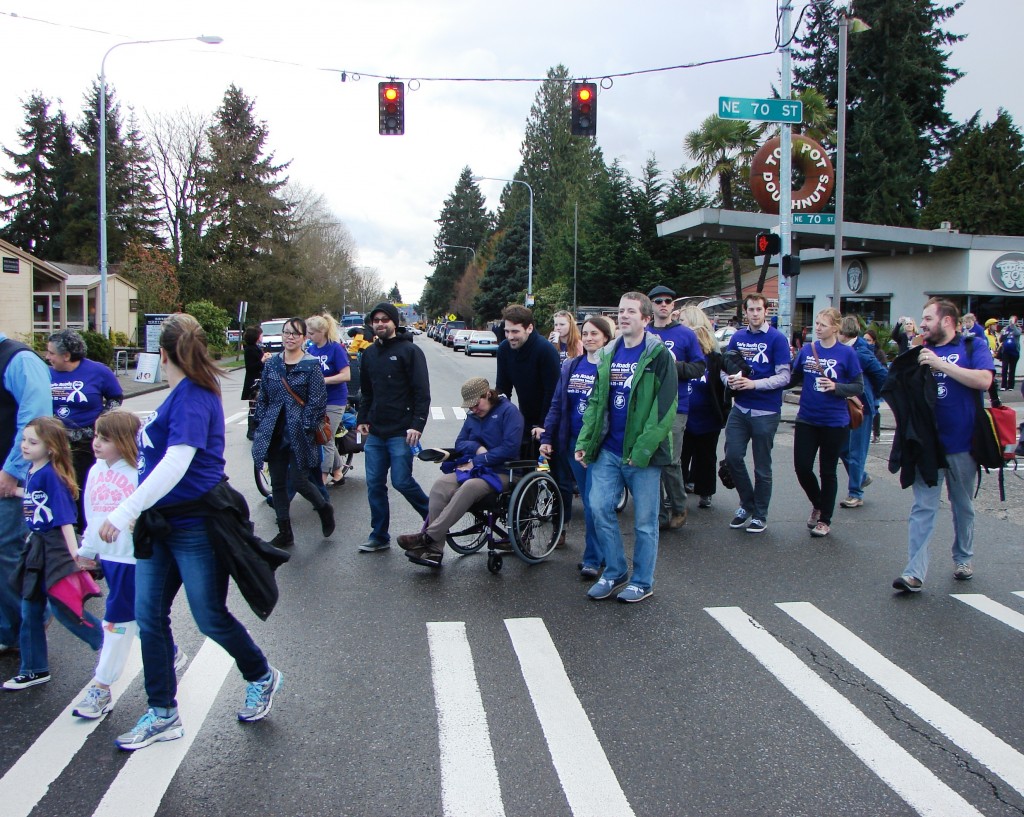 Residents of Ravenna and Wedgwood took to the streets on March 25, 2014, to walk for Safe Roads Awareness Week.  With the Schulte family in the lead, the crowd had a police escort to stop traffic along 35th Ave NE.  The marchers proceeded from Top Pot Doughnuts at NE 70th Street, up to the crash site of one year ago on NE 75th Street at 33rd Ave NE. 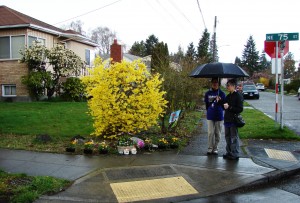 Memorial and moment of silence at the crash site on NE 75th Street.

At 75th & 33rd a memorial was set up for Dennis and Judy Schulte who lost their lives while crossing the street on March 25, 2013.  Their daughter-in-law Karina Ulriksen-Schulte and her ten-day-old son Elias were badly injured by a drunk driver.

At the crash site on NE 75th Street we observed a moment of silence.  Heavy rain began to fall and it seemed as though God Himself was weeping.  The Schulte family, including Karina in her wheelchair, circled the site and gave testimony to their determination to tell their story and thereby help make our streets safer.

A Speakers Rally was held on the lawn of Eckstein Middle School.  Darrin Grondel, Director of the Washington Traffic Safety Commission, told of ongoing efforts to change driver behaviors to end traffic deaths and serious injuries from impaired driving.  Sen. David Frockt (D), 46th District, urged everyone to keep up the pressure on the state legislature to take action on laws to address impaired driving.  Courtney Popp, an attorney who is a volunteer with MADD, urged everyone to hold themselves accountable to not let friends and family drive drunk.

Ms. Popp is a Traffic Resource Safety Prosecutor for the State of Washington and works with the complicated implementation of laws governing impaired driving.  On May 15, 2013 Ms. Popp and three state legislators spoke at a Wedgwood Community Council meeting on the complicated issues of prosecution of DUI and other impaired driving.  The most commonly asked question is, “why can’t vehicles Of DUI drivers be taken away from them?”  It was shown to be difficult to do because of issues surrounding the ownership of the car and the costs to the state for impounding cars. 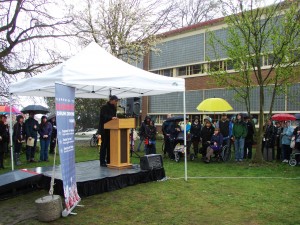 At the rally on Tuesday Dan Schulte said, having lost his parents Dennis and Judy Schulte who were killed by a drunk driver one year ago today, that his parents would want him to share the story, in hopes that people will change their behavior and will not drive while impaired by alcohol or drugs.  “I hope our family’s story will boost the efforts to make the streets safer,” Dan said.

For the continuing Safe Roads Awareness Week activities, Prevention Works in Seattle (WINS) will give drug and alcohol presentations to 8th grade classes at Eckstein Middle School.  The Lake City community will observe Safe Road Awareness with a march on Friday the 28th.