There will be a public hearing on Monday, April 7 at 6 PM in the City Council Chambers, 600 4th Avenue, on the subject of parks funding.

The parks funding proposal now before the Select Committee on Parks Funding was developed by a fifteen-member citizens committee.  Their recommendations were supported by Mayor Murray and with only a few minor changes he sent it to the City Council for their consideration. The Council now needs to decide the final package and pass an Ordinance placing it on the August 2014 ballot for a public vote. Here is a link to the full recommendation.

The purpose of the funding proposal is to provide $54 million in annual funding to address a $270 million major parks maintenance backlog; keep community centers open longer to provide more programs for kids and seniors; improve ballfields and playgrounds; fix crumbling infrastructure at the Zoo and Aquarium. 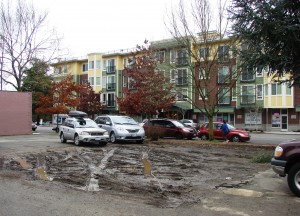 Only the muddy footprint of a demolished building is not parked-on at the corner of NE 86th Street in the Wedgwood business district. Across the street is the Jasper Apartment Building.

In the past, the Parks Department has been reliant upon levies to make up for huge cuts in their budgets.  At issue is whether the proposed creation of a Metropolitan Parks District with taxing authority, is or is not a better solution.

Those who are familiar with the long-running saga of the now-vacant corner of NE 86th Street in Wedgwood, will recall that the site has been acquired by the Seattle Parks Department BUT there is no money for development.  All sites are on hold while the issues of funding for development and future maintenance of parks is decided via the proposal to be on the ballot in August 2014.

You can send an email to City Council Members to let them know if you do or do not favor the proposal to create a Metropolitan Parks District.  Here are their email addresses: