In 2014 Johnson’s Auto Repair is celebrating its 25th year in business at the corner of 35th Ave NE & NE 95th Street in Wedgwood. But the heritage of Johnson’s goes back a full 65 years to 1949, when current owner Jeff Johnson’s father Roy had a gas station on NE 45th Street by University Village. When Roy retired in 1989, Jeff bought the current site in Wedgwood.  Johnson’s is a full-service repair shop with high ratings for quality and service, and some very long-time employees.

The year 2014 will mark major milestones for the whole Johnson family as their daughter, age 25, will be married this summer, and their son, age 15, will start working at Johnson’s Auto Repair. Three generations of Johnson men will carry on the family tradition in the shop, as Jeff’s dad Roy, age 89, still comes in to help with errands. 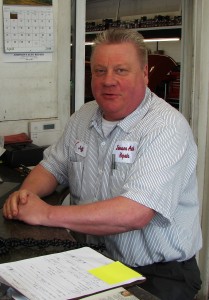 Over his lifetime Jeff Johnson has had some interesting sidelines to his work in the auto shop, proving that he is a versatile guy. Jeff once worked as a popular local stand-up comedian, had a brief career as a hydroplane racer (ending in a scary accident), and has travelled to the poorest parts of Mexico as part of his church’s program to build homes for the needy. Jeff’s current side-gig is as a city councilman for Lake Forest Park! If you want to see how Jeff looks in a suit and tie, check out the City of Lake Forest Park webpage.

We thank Jeff Johnson for his long-time support of the Wedgwood Community Council through advertising, and for his spirit of quality service which is an asset to the neighborhood.  The next time your car needs anything from a basic oil change to major work, give Johnson’s Auto Repair a call at 522-3305.