Home »Architecture»The History of Seattle as Seen in its Architecture 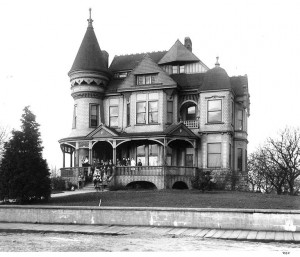 The Pontius mansion, built in 1889, was an example of the post-fire extravagant building boom in Seattle. Pictured here in 1904 are the children of the Mother Ryther Orphan home gathered on the porch. Photo by Asahel Curtis number 05330 Special Collections University of Washington.

On April 26 and May 10, 1 to 3 PM, UW professor and architectural historian Jeffrey Karl Ochsner will present an overview of Seattle’s architectural history in two lectures.  Each lecture will be 90 minutes with time for questions in the remaining 30 minutes.  The programs will be at the downtown Seattle Public Library in the auditorium accessed from the Fourth Avenue entrance.

The two lectures will cover the history of Seattle’s architecture from 1880 to the present.  Dr. Ochsner will discuss urban development, building types, stylistic directions and the major architects who shaped the architecture of the city and region.

Explore the development of Seattle’s architectural style during the city’s early growth. Important early architects, major stylistic directions and a range of building types will also be covered.

Examine the origins and development of modern buildings’ architectural forms and styles.  This lecture includes: modernism and regionalism; urban design and preservation; the works of notable architects and architectural firms in Seattle.

Dr. Ochsner has taught at the University of Washington for over 25 years. He has written and edited five books, along with numerous articles, addressing Seattle’s architectural and urban history. He is also editor and co-author of the forthcoming second edition of  Shaping Seattle Architecture: A Historical Guide to the Architects (2014; originally published in 1994).