The Wedgwood Meaningful Movies group presents a social justice documentary film, followed by discussion, on the second Friday of each month.  The July 11, 2014 movie will be shown at a new venue:  Our Lady of the Lake Parish, 8900 35th Ave NE in Jubilee Hall, with entrance nearest the corner of 35th Ave NE and NE 89th Street.  Doors open at 6:30 PM with light refreshments, and the film begins at 7 PM.  Donations are accepted. 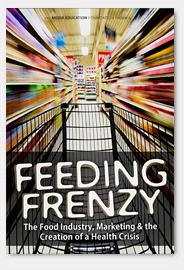 The July 11th film will be Feeding Frenzy: The Food Industry, Marketing & the Creation of a Health Crisis. Over the past three decades, obesity rates in the U.S. have more than doubled for children and tripled for adolescents.  A startling 70% of adults are now obese or overweight.  Resulting health problems include coronary heart disease, high blood pressure, stroke, and Type 2 diabetes.

Special Guest! Beginning at 7 PM prior to the movie showing of Feeding Frenzy, Washington State Attorney General Bob Ferguson will briefly speak and answer questions about the lawsuit that the Grocery Manufacturers Association (GMA) has filed against our state.  Attorney General Ferguson used Washington state’s Public Disclosure Law to force the GMA to disclose its members and how much money they each contributed to defeat I-522, the initiative requiring labeling of genetically modified (GMO) foods.