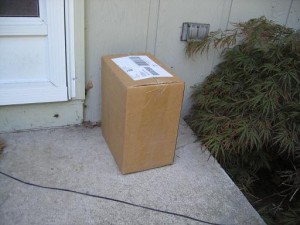 September update: In the first week of September in Wedgwood, a blonde woman driving a small, silver SUV was seen taking packages from porches.

August alert: Keep alert for unfamiliar cars on your street, sometimes cruising slowly not far behind a delivery truck such as FedEx or UPS.  In the last week in August in Wedgwood, theft of packages left on porches was reported.

A dark Blue Acura Legend car, late around 2000 year model, was seen.  The occupant, a clean-cut-looking white male about 5′ 11″ wearing a white tee-shirt, was seen taking packages off porches in Wedgwood on NE 83rd Street.  The car had 2-3 bicycles on the back which obscured the car’s license plate.  The car was packed with a bunch of Amazon boxes and many other things.  If you see this car, try to get the license plate number and call police. 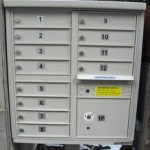 In a similar type of theft, other nearby-neighborhood blogs such as Victory Heights have reported cars cruising down the street, opening mailboxes and stealing mail.  Sometimes portions of mail are strewn about on streets while the thieves take credit card applications and other valuable items such as boxes of checks.  Getting a locked mailbox is advisable, especially before the holiday season when incidents of mail theft almost always increase.  There are many types of locking mailboxes, both individual and grouped, and a company which specializes in them will obtain the approvals needed from the post office and will do installation of the boxes.

Be aware that if you see a US Postal Service mail truck around the neighborhood on a Sunday, it is because they are delivering packages from Amazon.

We have the folks at the Meadowbrook Community Council to thank for working with the Seattle Police Department to find and break up a ring of mail-theft thieves.  Two abandoned buildings on Lake City Way NE at NE 105th Street, on the south side of Don Willis Furniture, had been taken over by squatters.  Bags of stolen mail were found there, and efforts eventually led to the buildings, which were in foreclosure proceedings, being torn down in September 2014.