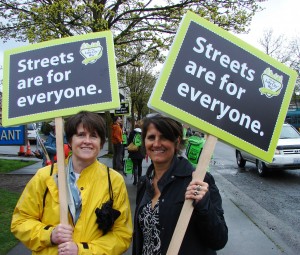 The Lake City Way Traffic Safety project has scheduled another “crosswalk action” to highlight pedestrian-safety issues on Lake City Way NE.  On Monday, September 29 at 4:30 PM everyone is invited to join in for a police-escorted march through the crosswalks at NE 125th Street and Lake City Way NE.  Meet at the Bartell’s at the northwest corner of the intersection.