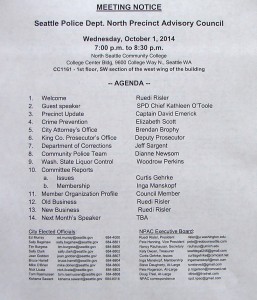 Local news outlets have reported that in North Seattle, police are overwhelmed by the number of home burglaries and are not able to investigate and pursue leads on many of these cases.  The number of police officers available to patrol North/Northeast Seattle is quite low.  What can we do to get better police coverage?

Two important meetings where you can express your concerns are at the Police Department’s North Precinct Advisory Council meeting on Wednesday, October 1, and in the City of Seattle 2015 Budget Process beginning Tuesday, October 7.

The North Precinct Advisory Council meeting on Wednesday, October 1, is, as always, open to the public.  This month’s special guest speaker will be SPD Chief Kathleen O’Toole.  NPAC will be held at the North Seattle College Campus, 9600 College Way North.  The meeting room CC 1161 is in the College Center building, first floor.  Here is a map of the campus showing the meeting location with its nearby parking lots.  Click on the map photo, and on the agenda above, to enlarge them.

UPDATE: Here is a report and a link to NPAC meeting minutes of October 1st, including what Chief O’Toole said regarding the so-called “leaked memo.” 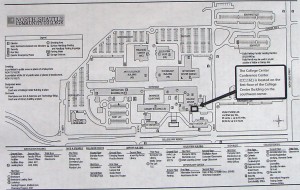 The City of Seattle’s annual budget planning process is the key to creating more funding for police officers and investigative resources.  You may attend the public meetings coming up on October 7 and 23 with one meeting at the Garfield Community Center and one in City Hall, downtown Seattle.  At any time you may also write letters, call on the phone or e-mail to Seattle City Council at the addresses indicated in the budget process announcement. Let your voice be heard:  if you are concerned about crime and police coverage, then do your part by making sure that the 2015 City of Seattle Budget reflects the needs.

One Reply to “Police Coverage in Northeast Seattle: Not Enough?”