Our thanks to the Maple Leaf Life blog for researching and posting about upcoming changes to local grocery stores due to corporate mergers and acquisitions.  In March 2014 the Safeway and Albertson’s grocery companies merged.  Now the Bellingham-based Haggen corporation will acquire some of those stores and change them into Haggen. 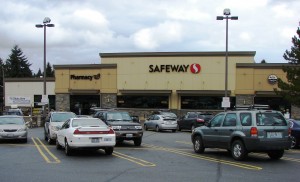 The Wedgwood Safeway was remodelled in 2011 by adding onto the front of the store, bringing it forward into the parking lot.

The only stores in the North Seattle area which are to be converted to Haggen, are the

UPDATE:  The Shoreline Safeway re-opened on April 13, 2016.  It had functioned as a Haggen after the merger until the corporation collapsed.  Fortunately that turmoil never affected the Safeway in Wedgwood.

The Wedgwood Safeway on 35th Ave NE at NE 75th Street opened in 1951.  The earliest big grocery store in Wedgwood was the IGA Foodliner, which opened in 1946 at 8606 35th Ave NE, present site of the Jasper Apartments.