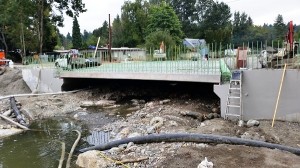 The South Branch of Thornton Creek now flows under a bridge on 35th Ave NE in Meadowbrook.

Happy New Year, everyone!  Oh, and by the way, 35th Ave NE is still CLOSED at NE 107th Street in Meadowbrook, next to Nathan Hale High School.   This work began in June 2014 with rechanneling the South Branch of Thornton Creek which flows eastward under 35th Ave NE, into Meadowbrook Pond.  Grading and landscaping is still being done on both sides of the road at the point of NE 107th Street.

The roadway of 35th Ave NE has been rebuilt in a bridge structure at NE 107th Street.  More time is needed for the road work including waiting for the concrete to dry.  Concrete panels on the southwest half of the roadway have been poured and framing for the northern side roadway panels and sidewalk/ADA ramps will continue into early January, 2015.  See “progress update” photo below.

Everyone is invited to the January 13, 2015 Meadowbrook Community Council meeting.  Jason Sharpley, Seattle Public Utilities engineer, will be providing a look back at The Confluence Project, the construction progress (with photos) and will field questions from the audience. The meeting will be at Meadowbrook Community Center, 10517 35th Ave NE, at 7 PM.  You can submit questions in advance to Jason Sharpley, Project Manager, at jason.sharpley@seattle.gov or 206-615-0030 or visit the project website. 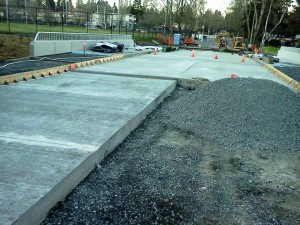 As of January 1, 2015: Looking north on 35th Ave NE, we see the road rebuilding work at NE 107th Street. On the left are the athletic fields of Nathan Hale High School. At left/top, the brick building is Jane Addams Middle School.