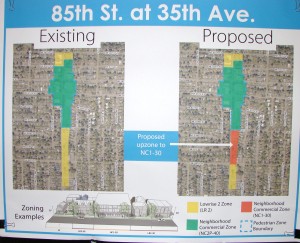 Reminder: The City of Seattle is taking input on proposed zoning changes.  Please do read this short informational article and go to the Understanding the Changes article for more detail.

More than 150 people filled the meeting room on Wednesday evening, June 24, 2015, to hear a presentation about how changes in zoning could help to develop more businesses and a more pedestrian-friendly walking environment along 35th Ave NE.

Changes in zoning could help protect our 35th Ave NE values in the face of oncoming developments, including replacement of any current buildings should that occur, at the “nodes” (intersections) of NE 75th and 85th Streets along 35th Ave NE in Wedgwood.  The proposed Neighborhood Commercial Zone would apply to future development in the event that any of the buildings at these corners are torn down and rebuilt.

Participants at the meeting looked at display boards showing the present zoning of the intersections and potential changes. The main proposed change is for more Neighborhood Commercial Zones which would be mixed-use with retail stores along the sidewalk and residential units on the upper floors.  The “retail” specification in the zoning proposal could help bring in more food and coffee venues which is the most-requested type of commercial activity among Wedgwoodians, as surveyed in the Vision Plan and the Future of 35th projects. 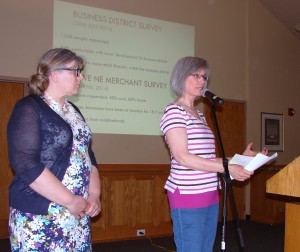 The meeting began with a review of the neighborhood process since the time that the Vision Plan was completed in the year 2010. The Vision Plan surveyed residents of Wedgwood to learn if they were comfortable with more development and retail diversity, accommodating more businesses.

The Vision Project was launched in part because of the building of the Jasper, the first four-story commercial building to be constructed near the “heart of Wedgwood” close to the NE 85th Street business intersection. The Jasper at 8605 35th Ave NE has “live-work units” at the sidewalk level. These have been disappointing to Wedgwood residents as they do not all have retail outlets and the building was not constructed to allow restaurants or coffee shops — the live-work units do not have the vent space that would be needed for a food service business.)

With the foundation of the Vision Plan, neighborhood activists expanded their work to a project called The Future of 35th Ave NE. Current co-chairs Jennifer Stormont and Mary Beth O’Neill explained how the project evaluated 35th Ave NE through the neighborhoods of Ravenna-Bryant, Hawthorne Hills, View Ridge and Wedgwood, with focus on the “nodes” of commercial intersections. When the Final Report was completed, the Committee met with Seattle City Council members, presented the suggested streetscape designs and asked for a rezone to provide for more retail and a more pedestrian-friendly environment along 35th Ave NE. 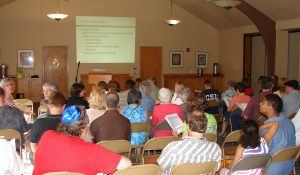 It was a packed house for discussion on commercial zoning at the meeting on June 24, 2015.

Ryan Moore, Senior Planner at Seattle’s Department of Planning and Development (DPD) explained the meaning of the Neighborhood Commercial Zones and the Pedestrian Zones. Pedestrian Zones must have storefronts with the ceiling height needed for the mechanical systems and venting of restaurants. The Neighborhood Commercial Zone would allow for storefronts (including restaurants) with residential units on upper floors.

Currently some buildings, such as the Seattle Audubon Society at 8050 35th Ave NE, are restricted in what they can do because of the inadequate zoning. They would like to expand their building to improve the street-level Nature Shop and create more space for classrooms on upper floors. They will not be able to do this unless the zoning is changed, and this is an example of the kind of expansion which would be allowed in a Neighborhood Commercial Zone. 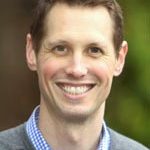 2016 UPDATE:    There is still time to submit input to the City of Seattle regarding the proposal for rezoning at Wedgwood’s commercial intersections.  In 2016 new Seattle City Councilman Rob Johnson, District 4, is chairman of City Council’s Land Use Committee.  This committee will review Wedgwood’s Future-of-35th zoning proposal and prepare it for submission to City Council.  This process is called a legislative rezone.