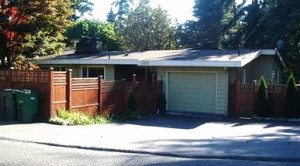 Recently in north Seattle there have been several cases of vacant houses being taken over by squatters. A loophole in occupancy laws makes it extremely difficult to take action on unauthorized entry if squatters have been in the house longer than three days.  Squatters have entered this  foreclosed, vacant home on NE 120th Street in Lake City.

City of Seattle regulations require that vacant buildings be boarded up and secured against entry; however, once entered, it is necessary for neighbors to call 911 within 72 hours (three days) that a house has been unlawfully occupied.

Keep an eye on vacant houses in your area, including rentals, which are sometimes entered by squatters during the night.  In another recent incident in Puyallup, a thief entered an unoccupied home which was for sale, and sold all of the appliances and furnishings by listing them on Craigslist.  It is advised that unoccupied houses, whether for rent or for sale, have someone inspect the home daily.   A Wedgwood house which is listed as vacant is at 2316 NE 85th Street, but people have been seen in and around the house.