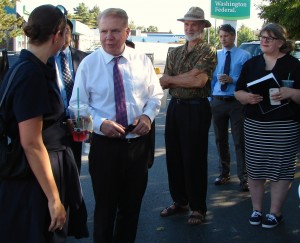 Mayor Ed Murray was welcomed to Wedgwood by Brianna McDonald, president of the Wedgwood Community Council (at left), Dass Adams, community council volunteer (in hat) and Jennifer Stormont of the Future of 35th Ave NE committee.

On Tuesday, August 18, 2015, Mayor Murray of Seattle took a tour of Wedgwood’s commercial intersections along 35th Ave NE to look at issues of building use, pedestrian accessibility, traffic flow and the changes to city zoning requirements which could make for a more shop-able and walkable Wedgwood.

The process of deciding how we can build the future of Wedgwood began with a wake-up call, the “Condo Controversy.”  At a Wedgwood Community Council meeting in 2007, neighbors presented their concerns about a new building to be built at 8606 35th Ave NE.

A former grocery store at 8606 35th Ave NE had, since 1989, been used as the Jewish Community Center (JCC).  By 2007 the JCC was in process of moving out.  The building owner had sold the site to a developer who planned to build a four-story condo building.  We called it the “Condo Controversy” because at that time, even community activists in the Wedgwood Community Council were caught unawares — was it really legal for a four-story building to be built along 35th Ave NE in Wedgwood? 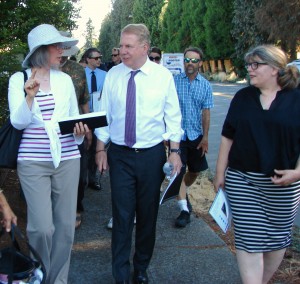 The community got a chance to catch its breath when the condo project went “on hold” during the economic downturn of 2008-2009.  The Wedgwood Community Council then formed an initiative to take action on land use issues.  In 2009 a committee was formed to apply for grant funding through the City of Seattle’s Department of Neighborhoods to create a Vision Plan for Wedgwood, completed in 2010.  This plan was in part a survey of how Wedgwoodians see the commercial district evolving and what services, street and land use planning issues are of concern.

The stalled condo project was sold to a different developer who built apartments instead, but using the same floor plans.  The Jasper Apartment building which opened in 2012 was a disappointment to the neighborhood because of the lack of storefronts and street-level interest for pedestrians.  At the street level, the Jasper does not have the built-in space for the venting and mechanical equipment needed by restaurants and coffee shops, so no shops like that will ever be put in.

Building on the Vision Plan and our frustration with our inability to influence the Jasper Apartment project, the next step was to form an alliance with nearby neighborhoods Ravenna-Bryant and Hawthorne Hills to advocate for needed improvements at the commercial intersections along 35th Ave NE.  This process, called the Future of 35th Ave NE Project, held meetings through 2014 and culminated in recommendations which have been presented to the City of Seattle. 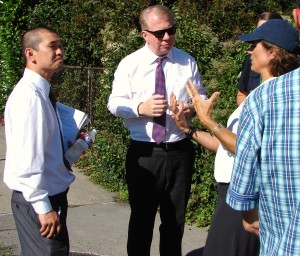 In 2015 the Future of 35th Ave NE committee representatives have met with members of Seattle City Council to request rezoning of the commercial intersections of 65th, 75th, 85th and 95th along 35th Ave NE, so that controls can be put in place for better buildings.  As buildings age and are replaced at these intersections, zoning can help bring in pedestrian-friendly streetscape in new buildings with storefronts, protected canopy over the sidewalks, and safer driveways into the buildings.

Stay tuned for more reports on the Future of 35th Ave NE process.  After a well-attended meeting on June 24, Seattle’s Department of Planning and Development has been taking input and implementing what rezoning could do to insure a walkable, shop-able environment along 35th Ave NE.

Getting more of what we want in Wedgwood’s business district, such as coffee shops, restaurants and small locally-owned businesses, can be helped by rezoning for the kind of buildings that are built in the future of Wedgwood.

In his visit to Wedgwood on August 18, Mayor Ed Murray indicated that Wedgwood could become the model for other neighborhoods in laying a good foundation of community input and planning, and in ensuring that future commercial development projects serve the needs of our neighborhood. 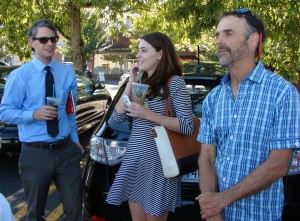 Other participants in the Walk in Wedgwood on August 18 were Ryan Moore of Dept. of Planning and Development (at left) and Chip Nevins of the Parks Dept. (at right.) 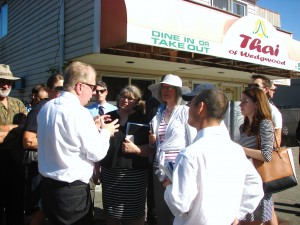 Mayor Murray stopped at many points along Wedgwood's commercial district to discuss traffic, zoning and businesses.