It’s voting season!  Ballots have gone out in the mail and must be completed, dropped off or mailed by Election Day on Tuesday, November 3rd.  One major item on the ballot is Proposition 1, called the Transportation Levy to Move Seattle or “Let’s Move Seattle,” for short.  What is the levy and what’s in it for Wedgwood? 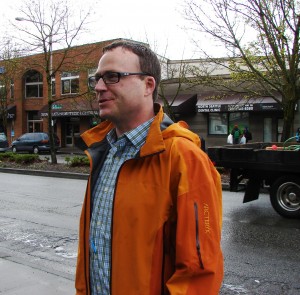 The Let’s Move Seattle Levy will fund transportation projects to reduce congestion, increase safety and attend to needed upkeep of infrastructure.  There are projects for the Wedgwood neighborhood which will be implemented if the levy passes.  In a conversation with Jim Curtin of SDOT on October 22nd, he told me (Valarie) that left-turn lanes on 35th Ave NE at NE 75th Street, are a project which will be done with levy money.

SDOT (Seattle Dept. of Transportation) will move the bus stops which now are on the south side of the intersection with NE 75th Street, and put them to the north of the intersection.   This will create space at the intersection to put in left-turn lanes.  With left-turn lanes on 35th Ave NE to go east or west on NE 75th Street, there will be a smoother flow of traffic.   This is just one example of projects which are scheduled to be done with money from Let’s Move Seattle.  Other projects include fixing the connection of NE 95th Street with Lake City Way NE, and projects for the Lake City Way Safety Improvement Corridor.