A traffic officer has been dispatched to 35th Ave NE at NE 75th Street in Wedgwood during evening rush hours of 5 to 7 PM, for the reason that a detour off of Sand Point Way NE has led to extremely heavy traffic along 35th Ave NE.  The intersection of NE 75th Street is a particular choke point for cars wanting to turn east-west onto NE 75th Street because there is no left-turn lane. 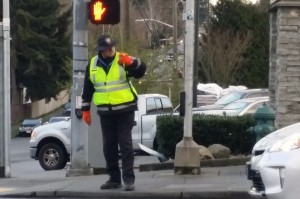 The cause of the detour is that a section of Sand Point Way NE is closed, where a retaining wall failed and the roadway is being re-built.  It is anticipated that one lane might re-open in the month of April.  The following update has been sent out by Seattle’s Department of Transportation:

“This is an update on the emergency replacement of a retaining wall in the 8500 block of Sand Point Way NE.
The contractor has finished setting the last of 15 piles into the slope just east of the road shoulder on Sand Point Way NE. The cranes used for drilling the 55 foot deep holes and for placing the 6 ton steel I-beams will be removed from the site this week, once the timber lagging is fully installed. The next phase of the work will be replacing approximately 220 feet of water main in the vicinity of the new retaining wall.
The new water main (16” in diameter) will be installed under the south bound travel lane of Sand Point Way NE.  This location, approximately 20’ to the west of the existing line, is further from the road shoulder, and more secure in the event of future soil instability. 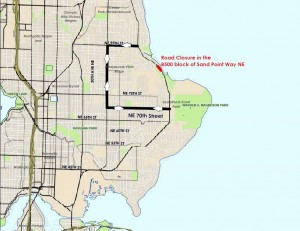 Unfortunately, this location means that Sand Point Way will not be reopened to traffic next week as originally planned. Crews will need to remove existing pavement, place the new line and repave the south bound travel lane before reopening the road.   Work will continue 6 days a week, typically 10 hours a day, in an effort to restore Sand Point Way NE to use as soon as possible.
It is likely south bound traffic will be restored by April 2, and north bound traffic in early May, but some of the construction work remaining is weather dependent, and the new water line must be tested before being placed into service, so this is not certain.
Traffic along the detour route – along NE 70th Street, 35th Avenue NE and NE 95th Street – has been very congested, especially during peak travel hours.  The traffic signals along the detour route have been retimed as much as possible to deal with these abnormal volumes.
Flaggers are now stationed at both ends of the work zone to assist drivers who have not understood the “Road Closed Ahead” signage, and uniformed police officers will be assisting with traffic flows on 35th Avenue NE during peak periods.
At http://www.seattle.gov/transportation/sandpoint_retainingwall.htm there is additional information about the project and a link to photos of construction activity – including an image that reveals the height of the new wall.   Updates will continue to be provided on the construction and throughout the project.”