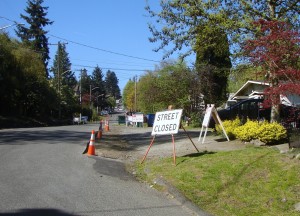 Under sunny skies on Thursday, April 7, the streets of “western Wedgwood” swarmed with road maintenance workers.

Along NE 85th Street where it meets Lake City Way NE, this unimproved street is in bad shape.  Today road maintenance crews identified dozens of spots where the underlying road base had failed, leading to potholes or to breakage along the edge of the road.  Crews were patching the spots in preparation for an all-over coating called microsurfacing.  Seattle Department of Transportation (SDOT) has a schedule of rotation through the City’s streets on a ten-year cycle to do this needed maintenance.

A neighbors group called Reimagining NE 85th Street has called for more City resources to be expended in this very congested western-Wedgwood area with its unimproved roadway, lack of shoulder or sidewalks, cut-through traffic and speeding, parking problems and lack of proper drainage.  The neighbors group is being supported by the Wedgwood Community Council in contacting City officials for help and in accessing project funding. 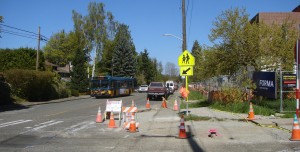 A curb bulb at the corner of NE 77th Street will help students safely cross 40th Ave NE on their way to school. At right is one of the new school buildings under construction.

Over on the eastern side of Wedgwood, a complex of new school buildings is under construction on 40th Ave NE and is expected to be ready to receive students in September 2016.   To make the streets safer for student access, the Seattle Department of Transportation is installing a curb bulb at the corner of NE 77th Street.  This curb will have a curving shape “bulging out” so that pedestrians who are waiting to cross, will be more visible to motorists.

It has been shown that any perceived narrowing of the roadway, such as the “bulge” of a curb bulb, helps warn drivers to slow down.  A similar strategy has been used on 35th Ave NE at about NE 107th Street where people cross the arterial to get to Meadowbrook Community Center and Meadowbrook Pond. 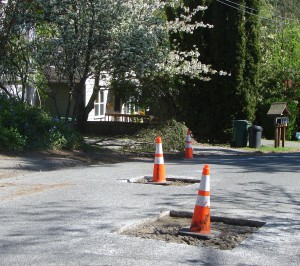 Seattle Department of Transportation workers prepared dozen of sections of NE 85th Street to be filled and then re-surfaced between 20th Ave NE to Ravenna Ave NE. 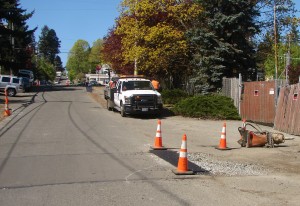 Edges of the roadway of NE 85th Street were being patched in preparation for re-surfacing. This view looks westward to the intersection with Lake City Way NE.