On Sunday evening, May 1st, a sinkhole opened up on the parking strip in front of a house at 6211 12th Ave NE.  The sinkhole was shown to be in the area of tunneling for light rail construction, in the vicinity of the Roosevelt station work.  Here is a report from the Seattle Transit Blog.

Approximate location of the sinkhole. Graphic via Jacobs & Associates.

A sinkhole has opened up just South of the Roosevelt Light Rail station on Sunday evening. According to a release from Sound Transit:

Crews for Sound Transit’s Northgate Link light rail construction contractor are taking steps to fill a small sinkhole that emerged in front of a home on 12th Avenue Northeast near 62nd Street Northeast above tunneling that took place last year. The sinkhole, with an opening about six feet long, will be filled with cement this evening. Crews will conduct ground-boring tests in the area to assess whether there are other issues in the area above where one of the contractor’s tunnel boring machines passed approximately 50 feet below last fall. Sound Transit and its contractor will be working closely with the City of Seattle on follow-up.

UPDATE:  We received a message from “Bertha” that the above sinkhole was not her fault:

@WedgwoodCC Ahem. Note that I had nothing to do with this one. #BrattyLittleSisters 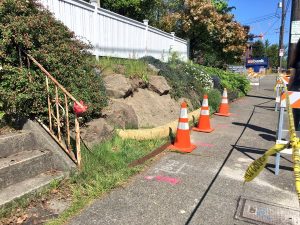