An important milestone was reached on May 5 when a street improvement project in Wedgwood successfully passed the first step:  approval and recommendation by the Northeast District Council. 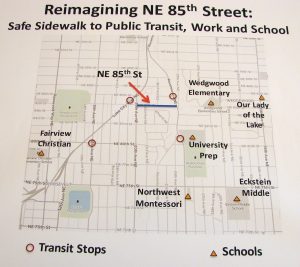 Over on the western edge of Wedgwood where NE 85th Street meets Lake City Way NE, the street is narrow and unimproved.  There is no proper drainage and street runoff goes downhill into a wetland at the foot of NE 85th where it meets Ravenna Ave NE.  This portion of NE 85th Street is less than 25 feet wide which does not meet City of Seattle standards, and in some spots the street narrows to only 18 feet, creating the potential for collisions of oncoming cars.

The western edge of NE 85th Street is subject to a high volume of cut-through traffic to Lake City Way NE.  NE 85th Street was the best way to get to a popular restaurant, Ying’s.  Even though Ying’s closed in March 2016, its replacement, a new Growler Guys restaurant, could potentially cause even more traffic across NE 85th Street. 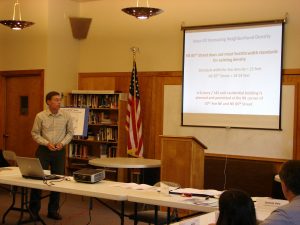 For all of these reasons and more, the neighbors on or near NE 85th Street formed a block association and made a application to the City of Seattle Neighborhood Street Fund, calling their project Reimagining NE 85th Street.  An important first step was achieved on May 5 when the Northeast District Council, representing the neighborhoods of northeast Seattle, chose to recommend the Reimagining NE 85th Street project to the City of Seattle for further analysis and cost estimating this summer.

UPDATE:  On October 20, 2016, the Move Seattle Levy Oversight Committee met and approved thirteen projects from around the City, all submitted by district councils.  Reimagining NE 85th Street was not chosen.  The Wedgwood Community Council will continue to work on this, perhaps resubmitting the project next year or look for other sources of funding.

The Wedgwood Community Council will continue to advocate for Reimagining NE 85th Street and will support the block association with work parties. Many tons of vegetation have already been removed from along NE 85th Street — stay tuned for announcement of the next work party. 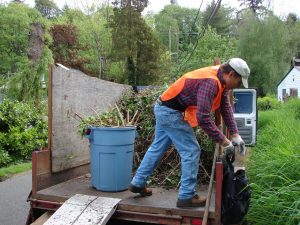 This section of NE 85th Street looks like a jungle but it is actually in Wedgwood. 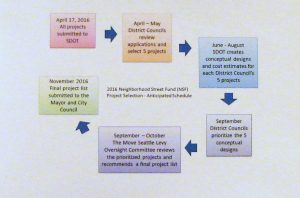