Around and near the Wedgwood area there have been demolitions of houses and commercial buildings in the past year, with more coming up in 2016. 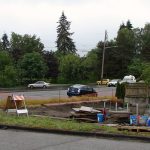 New house under construction at 7555 25th Ave NE across the street from Dahl Field.

In the Spring of the year the seasonal demolition and construction season begins.  Around Wedgwood there are several house-demolition/rebuilding sites and some commercial buildings are slated for replacement as well.

On 25th Ave NE directly across from Dahl Field. a long-vacant nuisance property which had been repeatedly broken into by squatters, was finally torn down and now a new house is going up in its place.  During the spring and summer season when more moving in and moving out goes on, neighbors are advised to keep alert to vacant properties.  All around Seattle there have been problems with squatters breaking into unattended properties.  Neighbors should always get owners’ contact info to make sure any move-in at a rental house is legitimate.

Around northeast Seattle older commercial buildings are being replaced with new ones or with higher-density housing.  The church building on 35th Ave NE at the northeast corner of NE 125th Street, address 3500 NE 125th, is to be torn down and replaced by a 44-unit housing development.  The Design Review is scheduled for mid-July 2016 with no date of demolition of the present building yet scheduled.

In Wedgwood the long-vacant commercial building at 8038 35th Ave NE is to be torn down sometime in June, according to the new owner.  We will post updates here on this page as we get them. 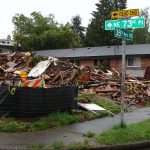 Although new construction is always interesting and exciting, it can be a shock to see the radically different architectural styles which replace traditional house forms, especially when they are taller than we are used to.

On 38th Avenue NE just south of NE 75th Street, a row of four small brick apartment buildings are gradually being replaced, one by one.  The most recent demolition was on May 20-21, 2016.  Here is the permit activity page to show how the site will be re-developed, for a six-unit building.  I presume it will be similar to the one shown below, which was built last year, replacing another one of the small brick apartment buildings.

Although it does not seem possible to squeeze such large buildings onto the site, we expect to see a new building at this corner on 38th Ave NE, similar to the newest one in the row, pictured below. 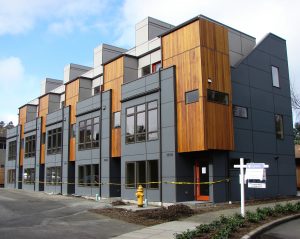