Summertime means road construction work, and there are projects going on in both eastern and western Wedgwood.  Some streets are presently receiving speed bumps and traffic markings, and some streets will be resurfaced beginning on August 4th.  Sidewalks have been built on or near 40th Ave NE at the site of the new school buildings. 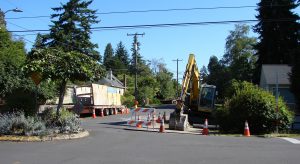 On the 38th Ave NE Greenway in Wedgwood, construction equipment is used for installing speed bumps.

Wedgwood has a Greenway, a side-street marked for recommended use by pedestrians and bicyclists, which originates at the Burke-Gilman Trail near Metropolitan Market at NE 55th Street. From there the Greenway is marked along 39th Ave NE northward as far as NE 82nd Street, then the Greenway jogs over to 38th Ave NE.

The final section of the Greenway on 38th Ave NE from NE 85th to 89th Streets is now being completed with signage and speed bumps.  Pictured here is construction equipment on 38th Ave NE at NE 88th Street.

Greenways are part of Seattle’s Safe Routes to Schools emphasis, so Greenways are intended to pass within a block of schools, as well as business districts.  At NE 85th Street curb cuts were made so that bicycles can leave the Greenway and go to Wedgwood’s business district.  The Greenway ends at Our Lady of the Lake Church and School at NE 89th Street, as the last school and route destination.

Over in western Wedgwood, Seattle Department of Transportation has set August 4th as the probable start date for microsurfacing beginning at NE 85th Street near Lake City Way NE. 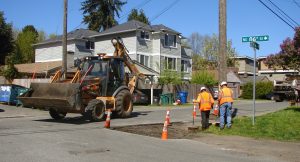 SDOT did filling and patching of the roadway in preparation for the summer microsurfacing work.

On the day of microsurfacing, all personal items, including vehicles, will need to be removed from the roadway. Residents will need to park their cars on a nearby block which is not being microsurfaced.

During the microsurfacing process, large equipment will apply a thin layer of seal coat onto the pavement. The street will be closed to vehicular traffic for up to eight hours to allow the seal coat to set. Residents, pedestrians, and even pets should be kept off the emulsion until it has dried. The microsurfacing emulsion will be sticky and difficult to remove from clothing or fur.

Quite a bit of street improvement and sidewalk work has already been done on 40th Ave NE at the new school buildings at NE 77th Street.  More sidewalk work will continue at the site, and the buildings will be ready for the school year which begins in September.