On hot summer nights you may be in search of a place to get a cold drink, and if the place has air-con, that helps, too.

New pubs and craft breweries have been springing up in trendy Seattle neighborhoods like Capitol Hill and Fremont, and now northeast Seattle is beginning to get its share of the action.

Wedgwoodians have the choice of our two neighborhood pubs, the Wedgwood Ale House and Fiddler’s Inn whose history dates back to the end of Prohibition in 1934.  For those willing to venture a little farther out and try the newest breweries, northeast Seattle from Ravenna to Lake City has some new places where you can sample a craft beer.

While not new, the Elliott Bay Public House & Brewery at 12537 Lake City Way NE has it all:  Elliott Bay is open seven days per week with an in-house brewery, growlers available, a large restaurant, private party space, and kids menu.

Up-and-coming in Lake City is Hellbent Brewing Company which opened in June 2015 at 13035 Lake City Way NE.  Hellbent is a taproom-only, with a regular schedule of food trucks coming alongside.  On Monday through Thursday Hellbent opens at 2 PM; on Friday, Saturday and Sunday, noon opening. 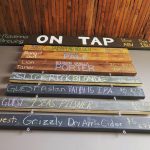 The newest brew pub in northeast Seattle (a pub which brews its own beer on the premises) is Ravenna Brewing Company which opened on April 15, 2016 at 5408 26th Ave NE.  Ravenna Brewing is open on Wednesday through Friday from 4 to 10 PM, and on Saturday and Sunday 1 to 10 PM.  There is a food truck calendar and a patio for outdoor dining.

The newly remodelled Ravenleaf Public House opened in July 2016 and it is not a brewery, but it has beer on tap, a food menu and an outdoor patio.  Ravenleaf is in the former Hudson space at 8014 15th Ave NE, where 15th Ave NE intersects Lake City Way NE.  Named for the meeting-point of the Ravenna and Maple Leaf neighborhoods, Ravenleaf is open Tuesday through Saturday beginning at 4 PM, and Sunday hours are noon to 5 PM. 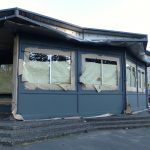 Painting at the former Ying’s on Lake City Way NE

Wedgwoodians are still waiting breathlessly for the opening of Growler Guys at the former Ying’s Drive-In at 8500 Lake City Way NE.  No opening date has been announced by the new owner.

Judging from the extensive upgrades and remodelling being done, my best guess is that Growler Guys might open in October 2016?  While you are waiting for Growler Guys, you can read about roadside architecture on Lake City Way NE, on Valarie’s history blog.