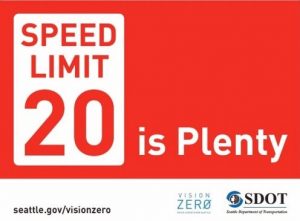 On 35th Ave NE which is a signed arterial, the speed limit posted is 30 and that would not change, and the same with NE 75th and 95th Streets which are also posted 30 miles per hour.

The full text of the Vision Zero 20/25 Speed Limit Proposal is here.  The justification for the proposal is that studies have shown that lower speed limits lead to fewer accidents.  Wedgwoodians are encouraged to e-mail City Councilmembers for Districts 4 and 5, Rob Johnson and Debora Juarez, to give your yes/no on the proposal for speed limit reduction.