The boardwalk and trail at Yesler Swamp is complete!  This wonderful urban amenity looks out over Union Bay and is adjacent to the Center for Urban Horticulture in Laurelhurst.  Everyone is invited to a celebration of completion on Sunday, October 16th, from 1 to 3 PM. 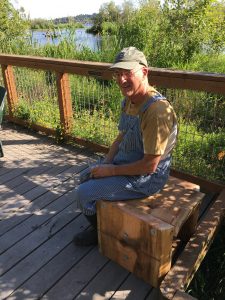 Henry Yesler was one of the earliest white settlers of Seattle and his sawmill, set up at the present site of Pioneer Square in 1853, was the economic engine of early days.  In the 1880s Yesler bought land from his friend Joe Surber and built another sawmill at the present site of the Center for Urban Horticulture at 3501 NE 41st Street.  For that reason the natural area at this edge of Union Bay has been named in Yesler’s honor.

The Friends of Yesler Swamp invite everyone to the celebration for the completion of the boardwalk and trail.  Tours will be included as part of the days’ program.  The celebration will be at the Center for Urban Horticulture on Sunday, October 16th, from 1 to 3 PM.   RSVP at uwbgfac@uw.edu or phone 221-2500.