The residents along NE 85th Street at the western edge of Wedgwood, near Lake City Way NE, organized themselves for a work party despite heavy rain on Saturday, October 29th. 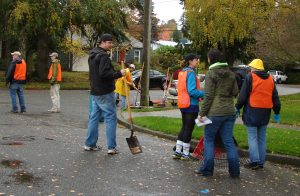 Neighbors work together to clear street drains near the western edge of NE 85th Street.

Working together to improve the neighborhood, the residents of western Wedgwood have had numerous work parties in 2016.  Neighbors have worked together to cut back vegetation along NE 85th Street, remove furniture and garbage which had been dumped at curbside, plant traffic warning signs (“slow down”) and write a street fund application to the City of Seattle called Reimagining NE 85th Street.  The Reimagining NE 85th Street funding request cited the poor visibility for drivers and dangerous conditions for pedestrians on this street which is a connector to bus stops and schools.

Some people think that the City of Seattle just “does stuff” such as needed street work, but actually, citizen groups can and do make applications for projects.  One of the functions of the Wedgwood Community Council, a volunteer neighborhood advocacy group, is to help support and promote grass-roots projects such as street improvement applications and connect Wedgwoodians with City resources.

With endorsement from the Wedgwood Community Council, Reimagining NE 85th Street was then presented to the larger consortium of northeast Seattle councils at a meeting in May 2016.  The next step was a City-wide evaluation process held at a meeting on October 20, 2016.  Because of the large number of projects submitted from all over the City, the Reimagining NE 85th Project did not “make the cut” this year. 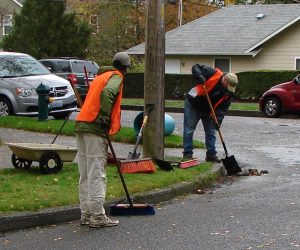 Rake those leaves and clear those street drains!

The Wedgwood Community Council will continue to advocate for this project.  Strategies may include seeking other funding as well as re-submitting Reimagining NE 85th Street to the City of Seattle Street Fund in 2017.

In the meantime, all the work that the NE 85th Street neighbors have done, has built teamwork, fellowship and pride of place on their street.  And their work in raking up autumn leaves has helped prevent plugged street drains and flooding.