Home »Transportation»Sidewalks»Wedgwood Traffic Advisory for the Week of January 30 to February 3, 2017

With sidewalks under construction on two streets in Wedgwood, plan ahead to avoid the work zones on NE 95th Street and on NE 83rd Street near Wedgwood School. 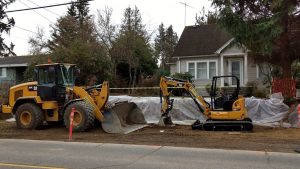 A retaining wall is being built in front of several houses on the south side of NE 95th Street to prepare for laying of a sidewalk.

The south side of NE 95th Street is pretty well torn up now with preparatory work for the installation of sidewalks.  The water meter of each house was moved, the area leveled to prepare for sidewalks, and retaining walls are being built where needed in front of some houses.

Consider using alternate routes on Monday through Friday during the work hours or be prepared to stop as indicated by flaggers, while construction equipment is sharing the roadway of NE 95th Street.

Before sidewalk construction can take place, there will be improvements to the drainage system alongside the roadway, on both NE 95th Street and on NE 83rd Street. 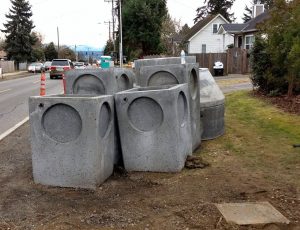 Ready for construction of drainage on NE 95th Street.

On NE 83rd Street between 28th Ave NE and Ravenna Avenue NE, temporary driveways have been built to allow residents to access their homes across the area which will become a sidewalk.  Drainage is being addressed, including at the foot of 28th Avenue NE on both sides of Ravenna Avenue NE.

NE 83rd Street is closed to through-traffic during the work week.

The new sidewalk on the south side of NE 95th Street will extend from 35th Ave NE at the intersection pictured here, westward to 32nd Ave NE.