Mayor Ed Murray is asking Seattle residents to light candles or hold lamps outside their homes on Wednesday night at 7 PM to show support for the city’s immigrants and refugees. 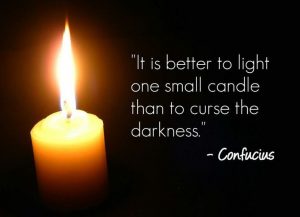 The mayor said he and staffers came up with the idea because so many people are asking what they can do to show solidarity and affirm compassion for refugees and immigrants.  The mayor is calling for people to step outside at 7 PM on Wednesday, February 1st, and hold aloft a light such as a candle, camping lamp, flashlight or cell phone screen.

“We have an ocean of people asking us what they can do,” Murray said in an interview with the Seattle Times newspaper on Monday. “Lighting a light, by itself, is not enough. But whether it’s protesting or lighting a candle, these actions send the message that, ‘We’re here and you need to deal with us.’ ”

Share images of your light with the hashtag #ShineALight.