Representatives from the Seattle Department of Transportation (SDOT) attended our March Board of Trustees meeting to give an update on the 2018 Paving Project in Northeast Seattle. The paving project includes a number of changes to 35th Ave NE between NE 45th Street and NE 87th Street.

SDOT started planning for the 2018 Paving Project in Northeast Seattle last August, when they asked residents to complete an online survey. The 23-question survey covered a number of topics, including travel preferences, satisfaction, parking, safety, and crashes.

In September, SDOT posted the results of the online survey. More than 20% of the 650 survey respondents were from Wedgwood, and 64% had a home zip code of 98115. The survey results suggested several opportunities for change along 35th Ave NE: 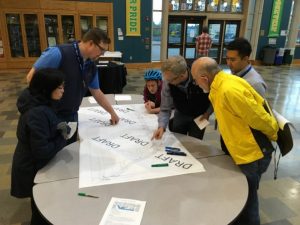 SDOT held an open house in October to share what they heard in the survey, what traffic data was showing, and get feedback about how to make changes to certain streets (including 35th Ave NE) to better serve the neighborhood’s needs. During the open house SDOT displayed draft cross sections of 35th Ave NE, showing different combinations of travel lanes, bike lanes, and parking. They also collected written and verbal comments from the 42 attendees. SDOT followed up with door hangers that encouraged residents to share feedback by November 13.

So why did we ask you about bike lanes?

Knowing that SDOT was working on design concepts for the project, but not having seen the concepts, we at the WCC emailed a survey to our members last week asking if they supported bike lanes along 35th Ave NE. We asked the same question on the Nextdoor Wedgwood site. It was a broad question, intended to give SDOT two more data points and to give us an indication of how the neighborhood might react to SDOT’s design concepts. In both surveys, the majority of respondents — 64.4% from our member survey, and 76% from our Nextdoor survey — were not supportive of bike lanes along 35th Ave NE.

We shared the results of our informal surveys with SDOT representatives at our March Board of Trustees meeting, where we were also joined by Seattle City Councilmember Rob Johnson, members of the Ravenna-Bryant Community Association, and several Wedgwood residents. SDOT Communications Lead Dawn Schellenberg gave a project update and presented a design concept for the changes to 35th Ave NE. The design concept showed five traffic divisions:

An open discussion followed, with many in the room expressing support for the design concept. Most people in attendance, and most people asked elsewhere, agree that decreasing the speed and sense of chaos along 35th Ave NE were important, positive changes. Attendees had questions about bike/bus interactions, which are still being worked out, and about turn pockets at the intersections of NE 65th Street and NE 75th Street, which are being considered.

SDOT expects to arrive at a preferred design concept in the next month or so. In April or May they will share the concept at a public meeting. While our crystal ball predicts that not everyone will be 100% happy with the outcome, we appreciate the level of engagement this project has inspired. We’ll keep you informed as the project progresses.