As part of the Vision Plan process that Wedgwood undertook in 2009/2010, the community aspired to be “a safe and pedestrian-friendly community that welcomes diversity and where a commitment to sustainability is everywhere apparent.”  However, is Wedgwood currently pedestrian friendly?

Wedgwood is located on a topographic ridge and 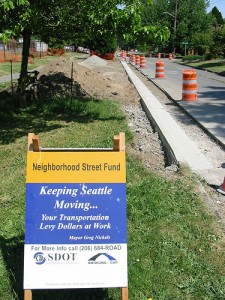 a sizable chunk of our neighborhood is separated east to west by nearly 110 feet of elevation gain.  Much of north Wedgwood, including those streets adjacent to our public elementary schools, lack sidewalks and stormwater facilities.  Our business district is fragmented into two nodes to the north (near NE 85th Street) and south (near NE 75th Street) which are separated by nearly 1/4 mile.  Furthermore, those that live along a main arterial in Wedgwood, especially in front of the Post /Office on 35th Ave NE, also know the hazards of crossing the street during the morning/evening commute.  As a result, Wedgwood has had a low Walk Score of 64 (out of 100).  Walk Score is a website that calculates how walkable your community or house is based on its proximity to key amenities. [Okay, Walk Score uses Google’s neighborhood boundaries for Wedgwood, which is wrong.  But at least they spell it right.]  Based on this low Walk Score, Wedgwood had been ranked as the 51st most walkable neighborhood in Seattle, better than North Delridge (#52) but worse than South Park (#50).  [I didn’t know there were more than 50 Seattle neighborhoods!]

Despite these challenges, Wedgwoodians take great pride in their willingness to walk in our community.  Which is why I thought 64 was too low for our neighborhood.  Well, good news.  Walk Score has changed their algorithm and Wedgwood has become a lot more walkable.  In fact, based on the new system, Wedgwood is a 72 (out of 100) and is Very Walkable!  They haven’t appeared to have updated their neighborhood list, so its not clear if we’re any better than 51st at the moment.

While Wedgwood still lacks sidewalks, stormwater facilities, improved pedestrian crossings, and other pedestrian safety improvements, Wedgwoodians enjoy using their feet.  So, if you’re in the mood for a walk in the face of these obstacles, check out the NE Seattle Trails Map by Feet First or the City’s latest North Seattle Walking Map.

It should be noted that pedestrian safety is a huge concern of the Wedgwood Community Council, especially around our schools.  We are always working towards expanding our network of sidewalks and improving our pedestrian crossings.

NOT-SO-NEW UPDATE: I stumbled upon this May 24, 2008 article that I had forgotten about in the Seattle Times, titled ‘Wedgwood is Made for Walking‘, featuring great quotes from our past WCC President, David Atcheson.  It’s a cute article about our wonderful neighborhood in the Real Estate section.

2 Replies to “Is Wedgwood Pedestrian Friendly?”