Home »Businesses»In the End, Safeway is Getting a Starbucks 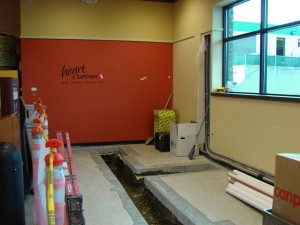 Last summer, Safeway opened up after a major interior remodel that expanded their store capacity and completed the region’s overhaul of all their stores to their Lifestyle design concept.  However, the store opened with one major element missing from its initial design…an in-store Starbucks kiosk.  But now, after about 5 months of being opened, the Safeway is moving things around a bit to make way for the Starbucks kiosk, albeit in a slightly different location.  The new Starbucks kiosk will be next to the southwest entrance, where the trenches are cut into the floor in the photo to the left.  The new Starbucks is set to have its soft opening around March 16th.

In other Safeway news, we understand from store manager Steve Smith that they will be having wine tastings soon.  At the moment, we don’t have any additional details on when the tastings will start.