Home »Architecture»Green House Along 35th Ave NE To Be Redeveloped 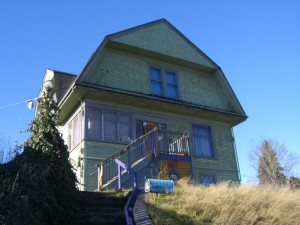 Towards the end of March, members of the Ravenna-Bryant Community Association’s Land Use Committee and Wedgwood Community Council’s Land Use Committee met with Sam Brace of Brace Development, the developer of the “Green House” at 7321 35th Ave NE.  The “Green House,” which is over a 100 years old, sits on the west side of 35th Ave NE across from the Safeway.  In its time, the “Green House” was the biggest house in the area according to the Wedgwood in Seattle History blog.  But now, the house is a bit out of place.

Sam Brace is a native of Seattle who’s family has a long and fascinating history in Seattle. According to tax records, Sam Brace purchased the property in 2002 which then extended west to 34th Ave NE. Brace Development built a new home on the west side of the lot at 7322 34th Ave NE in 2003.

The eastern side of the lot along 35th Ave NE was then transferred to Brace Properties LLC in 2006.  According to the City’s records, permits for subdividing and redeveloping the “Green House” were submitted in 2007. During our conversation with Mr. Brace, he explained that after submitting the permit application for redevelopment, financing became more difficult and has continued to rent out the house.  However, in December 2011, yellow Notice of Application signs went up again on the site notifying the impending redevelopment of the site.  According to the signs, the project was to “allow four residential and two live/work structures (6 buildings total) in an environmentally critical area. Surface parking for four vehicles to be provided.”

Should things go as planned, Mr. Brace hopes to break ground in July 2012.