Thursday evening’s Coffee Talk addressed issues which Wedgwood is now experiencing, and will see in the future, as redevelopment inevitably will occur in the commercial district along 35th Ave NE.

In 2007 the Wedgwood neighborhood was caught unawares when plans were announced for a new, four-story building on 35th Ave NE at NE 86th Street.  Wedgwood Community Council activists, including myself, did not even know that the zoning of Wedgwood’s commercial district permitted buildings at that height.   That year began the steep learning curve for us to find out how to be involved in the process of design & construction of new buildings in Wedgwood.   The “condo crisis” of 2007 set off the process which led to the writing of a Vision Plan for Wedgwood, and to the present WCC Land Use Committee which is working to get ahead of development issues.

On Thursday evening, April 26, the WCC’s Land Use and Future of 35th Ave NE committees presented the third in a series of Coffee Talks on the subjects of design and how planning & design interact with the City of Seattle design guidelines.   The Coffee Talks are sponsored by the American Planning Association/Washington Chapter’s Community Planning Assistance Team.   The two speakers at Thursday’s Coffee Talk were John Owen of MAKERS Architecture + Urban Design, and Cheryl Sizov, a senior Urban Planner with the City of Seattle’s Department of Planning and Development. 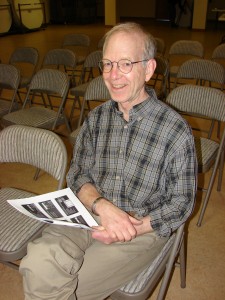 There is no better person to talk about design and development issues in Wedgwood than John Owen, who led the writing of Wedgwood’s Vision Plan.   All of the initiatives of the current WCC Land Use work are based directly upon the goals developed in the Vision Plan.   At last night’s Coffee Talk Mr. Owen explained some of the keys to successful building designs.   We know we like some buildings and not others; what it is about building design that affects us that way?   When you stand on the sidewalk and look at a building, how do you perceive it?   While these may be subjective issues, our reactions are based on real concerns, such as:  does the building have large areas of blank walls, or does it have inviting spaces such as courtyards, storefront windows to look into, or a canopy for shielding pedestrians from the rain?

The second speaker at last night’s Coffee Talk, Cheryl Sizov of DPD/City of Seattle, explained the recent updating of the Seattle Design Guidelines, which are poised to be presented and adopted by City Council soon.   The goals of the Design Review Program are to foster design excellence in new multifamily and commercial development, and to create a public forum for discussion of good-quality design.   Instead of prescribing certain types of building forms, the guidelines are performance-based.   For example, in the guideline that buildings should be inviting to pedestrians, the guidelines don’t say to “put a bench on the sidewalk.”   Instead, the design guidelines say that the building must engage with its environment by arranging uses on the site, integrating open spaces, and making the building accessible and comfortable for pedestrians to use.

Video of last night’s Coffee Talk meeting will be available on this webpage soon.  In the meantime, put the next Coffee Talk on your calendar:  May 24th, Place-making and Successful Streetscape Features.   There’s more to learn and more we can do to help influence the process of development in Wedgwood.   Oh, and the coffee and donuts were great – thank you, Top Pot Doughnuts, for your support of the Coffee Talk meetings!